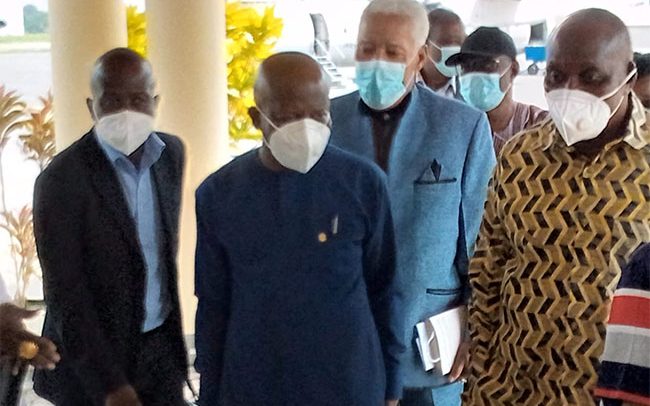 The Members of the Council of State are in the Western Region for a two-day working visit to primarily apprise themselves with the devastating effects of illegal mining in the region.

They would also want to abreast themselves with the activities of ‘Operation Halt’ in curbing the galamsey menace in the region.

The visit would also enable the members to familiarize themselves with development projects ongoing in the various Metropolitan, Municipal and District Assemblies (MMDAs) in the region.

It will then enable the Council proffer the requisite advice to he President, Ministers of States, and Heads of institutions when they are taking initiatives geared towards the development of the Western Region.

As part of their tour the members will visit the T3 Thermal Plant at Aboadze, the site where the Ghana National Petroleum Corporation (GNPC) operational headquarters is being constructed in Takoradi and the Gas Processing plant at Atuabo because of the key role the energy sector plays in Ghana’s economy.

The members will also be at the premises of these organizations to understand their operations and the adverse effect the covid 19 pandemic had had on their activities and the national economy.

The members of the Council will also interact with members of the Regional Coordinating Council (RCC), Metropolitan, Municipal, and District Chief Executives (MMDCEs).

They will also meet with Presiding Members of the various MMDAs, the Regional House of chiefs as well as key stakeholders in the Western Region as part of their visit.

Welcoming the members to the area, the Regional Minister, Kwabena Okyere Darko-Mensah noted that that in the next few years, the region would be transformed because of the numerous development projects currently ongoing in the region.

He said one of the greatest challenge the region is being confronted with is illegal mining also called ‘galamsey’ . He also mentioned youth unemployment but said the government has what it takes to deal with the challenge.

The chairman of the Council of State, Nana Otuo Srebour II explained that the visit was very important considering the contributions of the region to the national economy.

“So we are here to learn at first hand the development projects currently ongoing and how the galamsey menace is being dealt with in the are to enable us advise the president on the issues”.