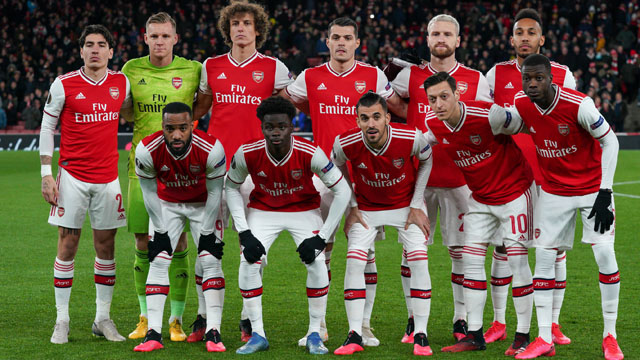 Arsenal have agreed a 12.5% pay cut for 12 months with their playing staff and senior coaches following lengthy discussions over the past two weeks.

The wage reduction will come into effect before the end of April and last until March 2021, although the club have vowed to repay the amounts agreed if the team hits certain on-field performance targets in the coming season.

Sources close to the deal have told ESPN the money will be returned in full if Champions League qualification is secured while the players will receive a lower figure if they seal a Europa League spot.

A club statement on Monday read, “We are pleased to announce that we have reached a voluntary agreement with our first-team players, head coach and core coaching staff to help support the club at this critical time.

“The move follows positive and constructive discussions. In these conversations there has been a clear appreciation of the gravity of the current situation caused by the Covid-19 pandemic and a strong desire for players and staff to show their backing for the Arsenal family.

“Reductions of total annual earnings by 12.5% will come into effect this month, with the contractual paperwork being completed in the coming days. If we meet specific targets in the seasons ahead, primarily linked to success on the pitch, the club will repay agreed amounts. We will be able to make those repayments as hitting these targets, which the players can directly influence, will mean our financial position will be stronger.

“The agreement is based on the assumption we will finish the season 2019/20 and receive the full broadcasting revenues. The resulting savings will help cover some of the financial risks we have this season in relation to our matchday and commercial income.

“We are proud and grateful to our players and staff for pulling together to support our club, our people and our community in these unprecedented times which are some of the most challenging we have faced in our history.”

Sources have also told ESPN that the move could save the club as much as £20 million. It is believed that although the vast majority of players have agreed to the terms, at least two have chosen not to accept the voluntary arrangement but regardless talks have ended amicably after head coach Mikel Arteta sought to intervene late last week.