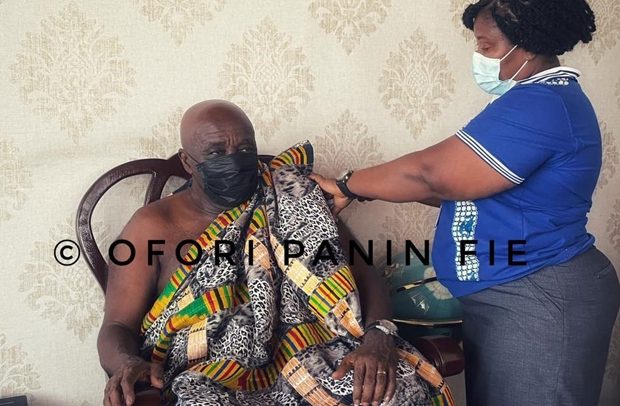 THE Okyenhene, Osagyefuo Amoatia Ofori Panin has hinted that the Government of Ghana, through the Ministry of Health, has done the good people of this country a great deal by taking measures to secure at least the first batch of vaccines

According to the Okyenhene, he decided after full assurance that the vaccine carries no harmful intent contrary to opposing theories.

Osagyefuo Amoatia Ofori Panin said “I have had full assurances with our medical doctors and my very own Prof. William Ampofo of the Virology Department at the Noguchi Memorial Institute for Medical Research that this vaccine carries no harmful intent as speculated by some people’’.

The Okyenhene made this known after he took his turn to take his Covid-19 vaccine jab on Wednesday, March 3, 2021.
Osagyefuo Amoatia Ofori Panin noted that the same Political Will and bountiful energy being used to fight Coronavirus Pandemic must be mustered to fight climate change and protect the environment from the current rage of devastation.

According to the Overlord of Akyem Abuakwa Traditional Area, who is an environmentalist, “this great Earth is under siege from our culture of consumption and competition. We have destroyed the World by our attitude and our adopted younger culture and we can repair it by changing our attitude and culture in the world”

“We must muster the same vigor, the equivalent political Will, and the bountiful energy that we are seeing in the battle against the Pandemic (Covid-19) to fight climate change. Let’s protect biodiversity”.

The theme for this year’s World Environment Day is ‘Celebrate Biodiversity’, which, as per the United Nations, a concern that is both urgent and existential.

“The emergence of COVID-19 has underscored the fact that, when we destroy biodiversity, we destroy the system that supports human life. By upsetting the delicate balance of nature, we have created ideal conditions for pathogens – including coronaviruses – to spread,” says the World Environment Day website.

The Okyenhene further urged the public to go for it as scheduled by the Ministry of Health.

‘’I also urge the general public to continue to adhere to the protocols without fail”, Osagyefuo Amoatia Ofori Panin said.

The government of Ghana has rolled out phase one of Covid-19 vaccination after receiving the first batch of 600,000 vaccines.