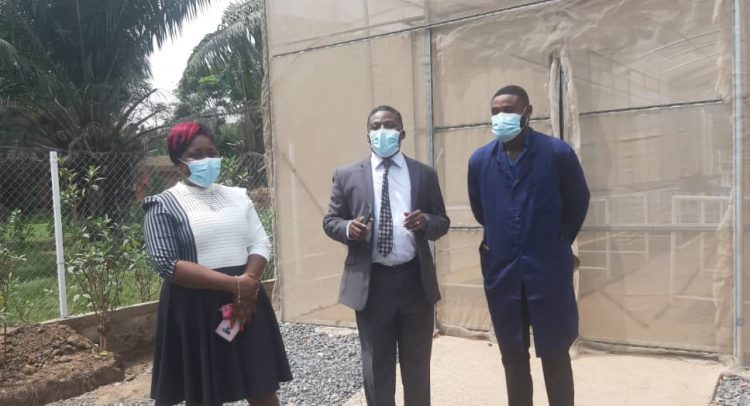 Professor Paul P. Bosu (middle) with Mrs. Benedicta Nkrumah-Boateng on one of the demonstration farms at the CSIR

The Council for Scientific and Industrial Research (CSIR) has showcased its accomplishments to journalists from various media organizations in a bid to generate more interest in science reporting.

In its first “knowledge series” programme organised recently, the journalists were exposed to the 13 research institutes under the Council and the varied work they do in agriculture, technology, industry, water and construction among others.

Deputy Director-General, CSIR, Professor Paul P. Bosu in his opening remarks said the Council has over 50 research centres, units and field stations, with more than 3000 work force made up of over 400 research scientists.

“We have been able to develop new crop varieties, like Boda (rice variety) and working hand in hand to help the government reduce rice importation, estimated to cost Ghana between 600 to 800m dollars every year,” he added.

Professor Bosu further noted that the CSIR has also worked to restore some coconut and oil palm varieties, and Taro, locally called ‘Brobe’, which were faced with near extinction over the last few decades.

Looking forward, he said the Council was actively engaging the private sector and working closely with the Ministry of Food and Agriculture extension officers to ensure the technologies that are developed by the Council reach farmers across the country.

Prof Bosu thus encouraged the participants to take interest in reporting on the Council’s activities and science in general as it held the key to unlocking the country’s development potentials.

“Kuafo Market Place app is also in place, bringing farmers, sellers, and buyers together for transactions. It connects farmers and investors together,” he said.

CSIR Head of Corporate Affairs, Benedicta Nkrumah-Boateng, said it was imperative for the Council to have a stronger relationship with journalists who had deep understanding in science and research to help advance scientific research in the country.

“One of the outputs of this training is to develop a CSIR press corps who will champion the dissemination of agriculture, science and technology related information,” she said.

St. Louis Chemical Engineer Who Led Pfizer Team Says The Vaccine Is The Only Way Out