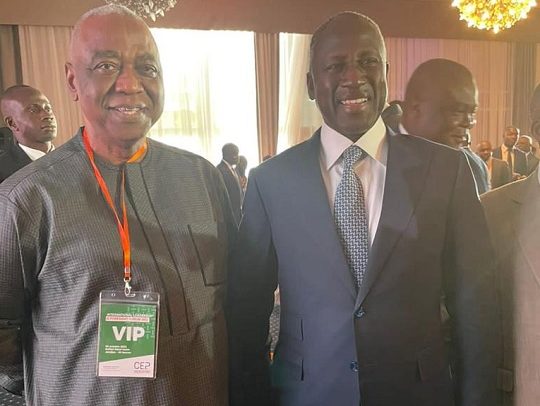 A former National Security Advisor, Ambassador Baba Kamara, has highlighted the danger cybercrime poses to national securities and called for holistic approach to deal with the subject.

He made the assertion while making an intervention as a panellist at the Alassane Ouatara Centre For Prospective Studies (CEP) International Leadership Forum, Abidjan, Ivory Coast last Monday on the topic “Security Risks and Threats in a Changing World.”

“Cybercrime or the unlawful or unacceptable acts committed by using electronic devices, including computers as either a target or a tool, pose a danger to national security, including those not associated with hostile governments or terrorist groups,” he told his audience.

In a tech-savvy world, he observed “the internet has so far created a breeding ground for contemporary crimes such as hacking, cyber terrorism, child pornography, spam, intellectual property piracy, denial of service and stalking among others.”

Continuing, he said, although these were practiced in the real world, the emergence of the internet has triggered its escalation in recent times and now a source of concern for countries.

Countries as a result, he said, “have deliberately embarked upon cyber security measures to protect their citizens’ privacy and classified information stored in their intelligence systems.”

On why these threats have emerged, he said, “banking and financial systems are increasingly digitised and connected to the internet, many cybersecurity experts fear that hackers could cause widespread economic instability, potentially causing a recession or depression.”

The fear that illicitly acquired information could be spread on the public space by hackers, according to him, “hackers could breach government agencies as well as the privacy of citizens.”

Regarding cyberterrorism, he said, “by hacking into power or utility infrastructures, terrorists could cause chaos throughout major metropolitan areas.”

The fact that cybercrime destroys the reputation of countries, he said, it makes the business environment difficult and discourages potential foreign investors from doing business in a country with a bad reputation.

By their remote deployment, he pointed out that, cyberthreats are alarming, explaining that “nowadays automated attack tools are freely available on the internet. As soon as the vulnerability of a particular operating system or application becomes public knowledge, the release on the internet of tools exploiting that vulnerability takes place within a few hours.”

As remedial measures, governments, he suggested, could take as he put it “multiple precautions against cyberterrorist activity, including legislative framework against cybercrime, guidance to businesses and state institutions, equipping them with best practices for enforcing strong encryption and cybersecurity measures.”

Governments, he charged, should set up procedures to report fraudulent activity and besides law enforcement adopt “social-technical and socio-legal measures to strengthen its security capability.”

Touching on the dividends Artificial Intelligence and drone offer many African countries, he was quick to add nonetheless that “the impact of emerging technology could be destabilising if used to enhance corporate profits and regime security without regard to the lives and livelihoods of ordinary citizens.”

‘One Night Stand’ With Jacinta This Saturday