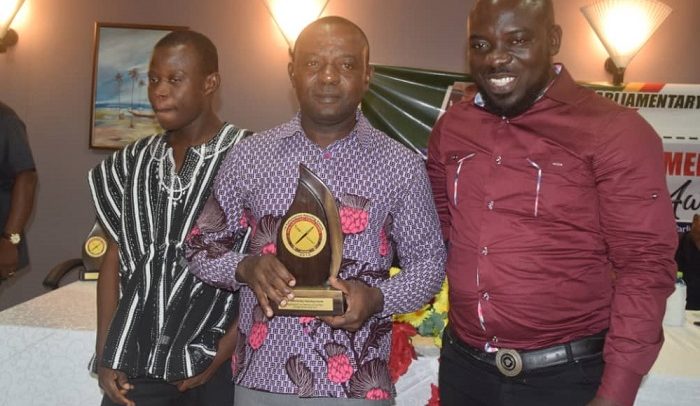 DAILY GUIDE’s parliamentary correspondent, Thomas Fosu Jnr, was adjudged the best reporter at plenary sittings or proceedings from the Chamber of Parliament during the first-ever parliamentary reporting awards ceremony in Parliament on Friday night.

Organised by the Parliamentary Press Corps, in conjunction with leadership of Parliament and the Public Affairs Department of Parliament, the maiden award ceremony was attended by the Speaker of Parliament, Prof Mike Oquaye; the First Deputy Speaker, Joseph Osei-Owusu, and some Members of Parliament (MPs) both from the Majority and Minority sides.

For his recognition, Thomas Fosu Jnr was presented with a beautiful plaque, a 32-inch Nasco LED TV and a piece of cloth.

For being the overall best reporter, he was given a plaque, TV set, a tablet, a piece of cloth and an amount of GH¢5,000 donated by the Speaker.

The New Patriotic Party (NPP) MP for Effutu, Alex Afenyo-Markin, and National Democratic Congress (NDC) MP for Ellembele, Emmanuel Armah Kofi Buah were given honary awards for being the most media friendly MPs from the Majority and Minority sides.

Prof. Mike Oquaye applauded the Parliamentary Press Corps for being an effective link between the public and Parliament as an institution.

He announced that for Parliament to be closer to the public, all committee sittings will now be open to media coverage since the committee’s works are very important to make the institution of Parliament very effective

He said journalists covering Parliament must always be on top of issues to be able to effectively transmit whatever is happening in Parliament accurately for public consumption.

The National Democratic Congress (NDC) MP for Sagnirugu, A. B.A. Fuseini, who deputised for the Minority leader, called on journalists to be always mindful of their code of ethics and be professional in their reportage.

The President of the PPC, Nana Birinkorang Agyeman, said the awards ceremony which will be an annual affair was instituted to reward hard work and motivate reporters to give off their best.

He said they were setting up a fund with seed money of GH¢20,000 to assist members who want to further their education.

Dr. Bona Koomson, a former communication lecturer at the University of Ghana and communication consultant who was also the independent judge in determining the winning stories, chaired the ceremony.