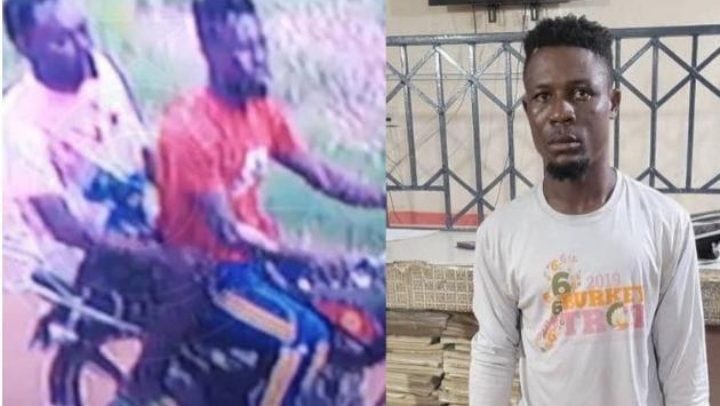 The Police is holding one person in connection with the daylight robbery at Dansoman Exhibition on Sunday.

According to a report from the  Police on their Facebook page said “A special anti-robbery squad has carried out an intelligence-led operation, in which a robbery suspect was arrested while one other is currently being pursued over a daylight street robbery at Dansoman”.

The police assured the general public that the other suspect will be brought to book to ensure that kind of robberies are nipped in the bud.

A video trending on social media spots two men on a motorbike attacking Madam Bernice Quaye who disclosed to the police she was on her way to visit her parents at Exhibition Roundabout after church.

The two young men on an unidentified motorbike attacked her at 24th Cl Street and snatched her brown handbag containing her Nokia 101 and Samsung Galaxy A23 phones, two foolscap notebooks, and an amount of GHc60.00

In videos that went viral, the robbers who were sitting on a motorbike were seen to have attacked the woman who was walking majestically to her home.

Although the woman tried to fight back, she was overpowered by her attacker who took away her handbag.

The other suspect currently on the run has been declared wanted by the Police.