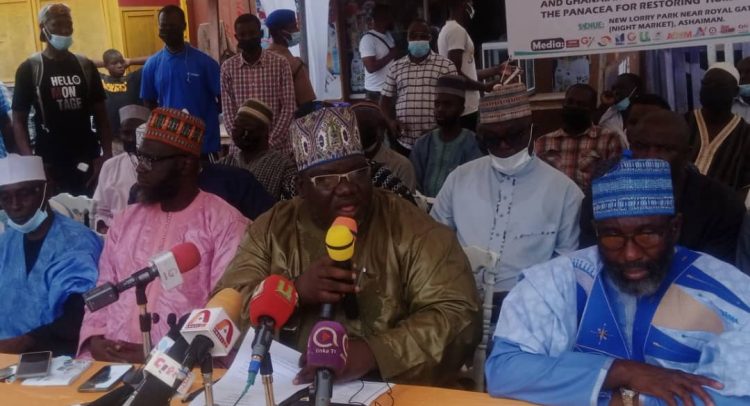 THE ASHAIMAN Muslim Community in the Greater Accra Region has challenged Members of Parliament (MPs) in the country to publicly declare their stance on matters relating to Lesbian, Gay, Bisexual, Transgender, Queer, Intersex, Asexual (LGBTQIA+) movement.

According to them, failure on any legislator not to declare their stance means they are in support of the LGBTQIA+ practitioners.

They are of the strong believe that the MPs coming out to made their opinions known about the criminalization of LGBTQIA+ bill pending before Parliament will go a long way to help it pass it into law.

The Muslim group further declared their unflinching support for the eight Members of Parliament who are sponsoring a private member bill on the promotion of proper human sexual rights and Ghanaian family values.

Already, the much talked about draft legislation by Ghana’s Parliament pass through the first reading which seeks to criminalise LGBTQIA+ practice and advocacy in the country.

Addressing a press conference in Ashaiman Monday September 7, 2021, Alhaji Imam Abass Abdul-Karim Umar, spokesperson for the Ashaiman Muslim Community stated that they are excited that although there are some provisions in the Criminal Code under which homosexual can be prosecuted but steps are being taken to pass a specific law in Ghana to make homosexuality a criminal offence.

He called on all Imams and Mosque leadership across the country to join the advocacy to fight against the LGBTQIA+ in Ghana with their platforms.

According to him, they will use their various platforms to ensure that any MP who do not declare his or her stance to lose votes in the Muslim community in their respective constituencies.

“Muslims here feel total abhorrence towards this shameful act, because our religion, Islam, emphatically forbids this deed and prescribes a severe punishment for it in this world and the next,” he stated.

For his part, Alhaji Ibrahim Salisu Yaro, Ashaiman Municipal Zongo Chief was of the view that the LGBTQIA+ goes against the pure human nature created by Allah thereby destroying families, adversely affecting the birth rate, causing the spread of killer diseases.

According to him, the Ashaiman Muslim community stands in solidarity with all anti LGBTQIA+ campaigners in Ghana and across the world.

He said they will continue to stand up against gay practice as Muslims by using their platforms to condemn it albeit tirelessly efforts by the LGBTQIA+ community through lobbying to push their themes and ideas on every virtual platform available.

The Municipal Muslim Chief called on the general public and all the MPs to rally behind their colleagues to push the bill through without further delay.

“We are counting on Parliament of Ghana, the government of Ghana and the President to expedite action to see to the smooth passage of the bill into law,” he said by serving notice that they will resist vehemently and fearlessly anything contrary to the passage of the anti LGBTQIA+ bill.