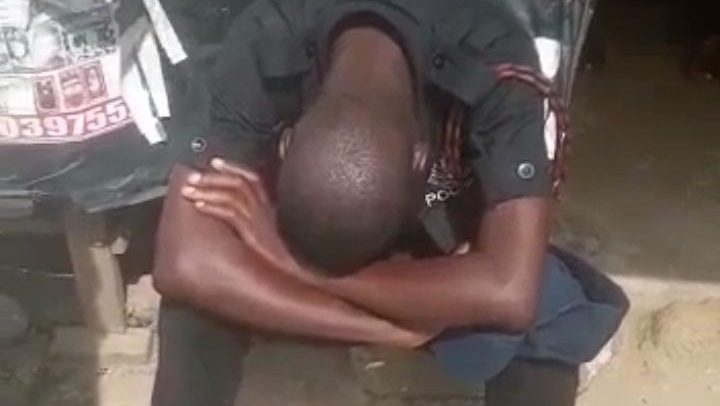 The Ghana Police Service has interdicted a suspected drunk uniform policeman who was captured in a viral video.

A statement from the Service Wednesday January 12, 2022 said the policeman in viral video has been identified and in line with police regulations, has been interdicted, pending investigation into his conduct.

Prior to the investigation, the Police Administration has assigned a clinical psychologist to evaluate him and offer him the necessary support, a statement issued by police said, adding that “In addition, he will be referred to the Police Medical Board for thorough review and support towards rehabilitation where necessary.”

The Police said the officer’s suitability or otherwise to remain in the Service will depend on the outcome of the investigations and the recommendation of the Police Medical Board.

The embattled uniformed policeman was captured in the video sitting and looking unstable.
He stood up few moments afterwards and attempted to walk away but appeared unstable and wobbly in his steps.

A citizen who witnessed the incident captured the video and ran commentary on it while criticizing the officer’s conduct and questioning the manner at which the service recruit such a character when there are many more responsible unemployed Ghanaians.