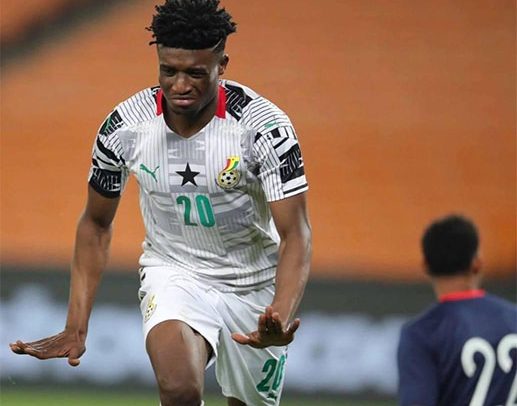 Information gathered by DGN Online indicates that, Ajax midfielder, Mohammed Kudus has joined his teammates in Cameroon today as reported by this news outlet.

Ajax medics gave the playmaker a clean bill of health before the club released him to Ghana on Wednesday.

Ghana FA prepared for his flight to Cameroon.

The black Stars will be facing Gabon on Friday before Comoros.

However, some concerns raised by some football analysts were whether the player is fit to feature for the Black Stars.

Ghana arrived in Cameroon on Saturday night, without the former Right to Dream Academy starlet.

Kudus Mohammed albeit his condition, reportedly joined his club side Ajax Amsterdam in a mid-season training tour of Portugal

He picked up injury when he featured for the Black Stars against South Africa in November last year in a 2022 FIFA World Cup qualifying match.

“Kudus got injured in our last game against SA, he started training recently with his club (Ajax) so we are expecting him to join us in the coming days, a week’s time when he is fully fit and hopefully we can count on him as the tournament progresses,” Ghana coach, Milovan Rajevac said in the pre-game press conference.