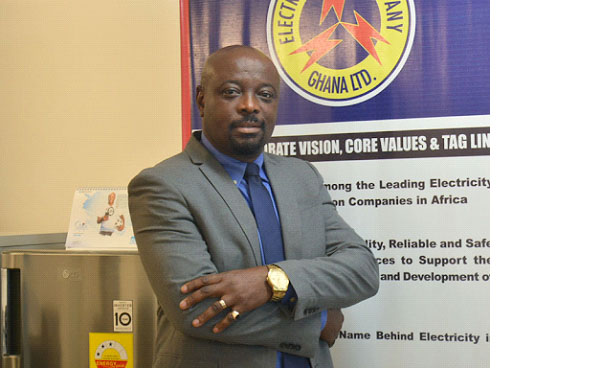 THE ELECTRICITY Company of Ghana (ECG) is spending GH¢44.7 million to ensure reliable power supply in the Ashanti Region.

Of this, it would in the short term spend GH¢15.2 million to conduct extension and intensification power projects in the region.

In the medium term, plans are far advanced to use the remaining GH¢29.5 million to construct a sub-station at Agogo to help improve power supply in Konongo, Ejisu, Kumawu and nearby areas.

Part of the GH¢29.5 million will also go into the construction of a power switching station at Adansi Asokwa aimed at helping to improve service delivery of the ECG so that customers will be better served.

Managing Director of ECG, Kwame Agyeman-Budu, addressing journalists in Kumasi, stated that his outfit was determined to improve power supply in the Ashanti Region and make the frequent power cuts a thing of the past.

To help achieve its target, he announced that the ECG had decided to spend more to improve power supply so that customers would no longer complain about power cuts, with its attendant problems.

“Our prime aim is to correct all the faults that have been detected in the system, which usually leads to frequent power cuts, and that is why we have decided to spend this amount to make sure that our customers feel good,” he said.

The ECG MD, who was in Kumasi on Friday with some other officials of the company, said “ECG cherishes its customers and very soon their services would see massive improvement.”

He said ECG had realized that most of its transformers in the Ashanti Region were old and could not perform well “so plans are in place to replace them with new ones.”

Mr. Agyeman-Budu also said faulty cables, insulators and other ageing equipment in the Ashanti Region, which were obstructing effective power supply, would be replaced without delay.

According to him, the ECG had secured a new technology called VIT to easily detect faults, isolate and fix them without plunging an entire area into darkness.

He said ECG staff would henceforth use conductors to repair faults.

Mr. Agyeman-Budu stated that it was never the intention of the ECG to frequently plunge its customers into darkness, lamenting that the ECG even lost a lot of money whenever power supply was cut.