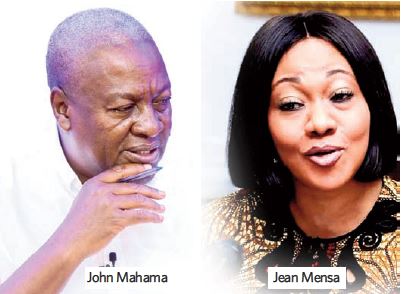 The Supreme Court yesterday dashed the hope of former President John Dramani Mahama reopening his case to enable him to subpoena the Chairperson of Electoral Commission (EC), Jean Adukwei Mensa, to testify in the ongoing Presidential Election Petition he filed late last year.

The seven member panel presided over by Chief Justice Anin Yeboah, in a unanimous decision, dismissed the application for not disclosing the ‘fresh evidence’ he was seeking to solicit from the EC Chairperson.

The court was also of the view that Mr. Mahama failed to demonstrate how that evidence he was seeking to adduce through the EC boss was going to help the court in resolving the dispute before it.

It was the case of the respondent that the petitioner did not meet the threshold of burden of proof and the burden of providing evidence, and said they will not adduce any further evidence in the trial.

The decision did not go down well with lawyers for Mr. Mahama, who argued that the EC chairperson could not ‘evade’ cross examination as he insisted the EC Boss had already elected to adduce evidence by way of filing a witness statement at the pre-trial stage.

Tsatsu Tsikata, lead counsel for Mr. Mahama, then filed an application urging the court to order the witness to testify, but the court in a unanimous decision on February 11, overruled the objection, stating that it would be going beyond its powers if it were to compel the EC Chairperson to testify in the trial.

The court held that it was a well settled principle of law that a court could not compel a party in a case to adduce evidence.

Mr. Mahama’s lawyers, after the court’s decision, quickly filed a fresh motion to reopen his case to enable him to issue a subpoena on the EC Chairperson to mount the witness box and testify.

He stated in the motion that he “believes that in the interest of justice and of fair trial as required by the constitution, the court exercised its discretion to allow me to reopen my case in order to have the chairperson of the first respondent (EC) and the Returning Officer of the presidential election in respect of which this petition had been filed, to appear and testify in these proceedings.”

He said it was under those circumstances and the sworn affidavits which had legal effects that they had reasonable expectation that the EC Chairperson would be testifying.

Mr. Tsikata told the court that the chairperson was a witness who had every reason to accept a subpoena and go to court to testify as she performed a very important constitutional duty and must be made to account to the people for her stewardship and also to vindicate herself.

The application was opposed by counsel for the EC, Justin Amenuvor, who argued that the petitioner voluntarily closed his case and could not now be seeking to reopen it based on representations made by the Chairperson of the EC.

He quoted an English case and argued that the petitioner who had a competent legal representation could not close his case and now be seeking to fill gaps in his case by subpoenaing the Chairperson of the EC.

Mr. Amenuvor also told the court that the application was not warranted by any rule or laws of procedure but just an abuse of the processes of court.

Akoto Ampaw, lead counsel for President Akufo-Addo, also opposed the application stating that it was their view that the general principle of law that once a party announced that he had no further evidence to adduce and closed his case, the court was supposed to affirm that decision.

He argued that it was the lawyer for the petitioner who closed his case after taking into consideration the evidences of his witnesses and their cross-examinations.

Counsel argued that the petitioner led all the evidences he had through his witnesses and could not come back to court seeking to reopen his case just to lead evidence on the same matter which his witnesses had already addressed.

Again, Mr. Ampaw argued that it was irrelevant to say that the Chairperson of the EC must be given the opportunity to mount the witness box to vindicate herself as a basis for reopening the petitioner’s case.

He indicated that the case before the court was about votes and numbers and there was nothing about the alleged engagement between Dr. Michael Kpessa-Whyte and Robert Joseph Mettle-Nunoo and the EC boss which showed how it affected the outcome of the election.

Ahead of the ruling by the court, lawyers of the petitioner had written to the Chief Justice requesting for an opportunity to make further argument on their application to reopen case following what he claimed to be a last-minute question by Justice Samuel K. Marful-Sau, a member of the panel, during Monday’s hearing.

The question of the Justice suggested that an earlier ruling of the court had noted that the EC chair could not be compelled to testify and the petitioner had said he needed to argue further on the question before the ruling was delivered same day.

The court then said it was a legal issue and they were going to address it in the ruling.

The seven member panel of the court presided over by the Chief Justice and assisted by justices Yaw Appau, Samuel K. Marful-Sau, Nene Amegatcher, Prof. Nii Ashie Kotey, Mariama Owusu and Gertrude Torkornoo, in their unanimous ruling, held that the petitioner did not decide to close his case after the testimony of his third witness just because the Chairperson of the third respondent had filed a witness statement.

The court held that a trial judge has a wide discretion to reopen proceedings before judgement is rendered but that discretion was one which should be exercised sparingly and with restraint as motion to reopen a matter necessarily involved a balancing of the accountability of counsel for decisions regarding the prosecution of his case and the interest of justice.

On the issue of the EC Chairperson vindicating herself as argued by Mr. Tsikata, the court wondered how she could vindicate herself when she was not on trial before the court neither was she being personally sued nor arraigned on any complaint or accusations, whether civil or criminal, for which she ought to explain herself or account to anybody on what she had done or not done.

It was the view of the court that the respondents decided not to testify at all so no situation came up for there to be the need for the petitioner to call further or fresh evidence to clarify anything, be it a doubt or a point raised in the testimony of the respondents, since there was none.

“The petitioner in this application has not given us an inkling of the new or fresh evidence he wants to bring to the fore through the chairperson of the first respondent and how that evidence will assist the court to do justice in the matters under consideration in this petition.

“Neither has he disclosed how that evidence will advance the course of his petition. For the above stated reasons, we find no merit or whatsoever in the petitioner’s application to reopen his case for the sole purpose of compelling his adversary’s intended witness to testify through a subpoena without indicating the sort of evidences he tends to solicit from the said witness and how that evidence is going to help the court in resolving the dispute before us. We accordingly refuse the application and proceed without any hesitation to dismiss same,” the decision read by Justice Anin Yeboah held.

Immediately the motion to reopen the case to enable them to subpoena the EC Boss was dismissed, Mr. Tsikata said they filed two applications before the Supreme Court.

The applications are a review of the ruling by the court on February 11, dismissing the application to compel the EC Chair to be in the witness box for cross-examination.

They also filed an application for a stay of proceedings pending the hearing of that review application, scheduled for February 18.

Mr. Tsikata said the applications were being filed at the same time the Chief Justice was reading out the ruling on the petitioner’s application to reopen his case.