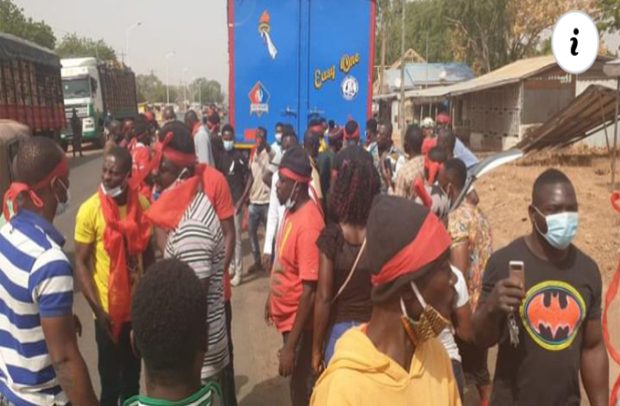 Some of the drivers protesting

Drivers and Transport owners of the Ghana Private Road Transport Union (GPRTU) in Aiyinase in the Ellembelle District of the Western Region are up in arms against the area’s union chairman for alleged misappropriation of the union’s funds.

The drivers also accused their Chairman, Emmanuel Gokeh, for allegedly failing to render account after being in office for the past four years.

The irate drivers are claiming that the Chairman purportedly has been running an autocratic administration and has refused to work with the transport management committee.

They asserted that Mr. Gokeh uses other forms of threats to intimidate members and was quick to prevent members from loading at the station.

A meeting of the union last Thursday which had the Regional Chairman of the GPRTU, Simon Cudjoe present, ended abruptly following a disruption by some of the drivers.

The drivers hooted at the Aiyinase Chairman who was also present at the meeting, forcing him to leave without reaching any consensus with the members.

One of the drivers, who gave his name as Paul Erzuah, said cynically that “the meeting was a waste of time.”

He said they were not convinced with the Regional Chairman’s approach in resolving the issue and accused him of siding with the Aiyinase Chairman.

“Mr. Simon Cudjoe is bias and reluctant to ask the embattled Local Union Chairman to step aside to pave way to form Interim Member Committee to run the station until fresh elections are held to elect new branch executives for Aiyinase GPRTU,” he disclosed.

He alleged that the Western Regional Chairman and the embattled Local Union Chairman are planning to prevent about 13 drivers who took part in the protest from operating at the station.

Reacting to the issue, the Western Regional Chairman said the drivers’ allegations were unfounded and that they failed to back their assertions with facts.

He said none of the branch chairman’s activities was in breach of the constitution of the GPRTU.