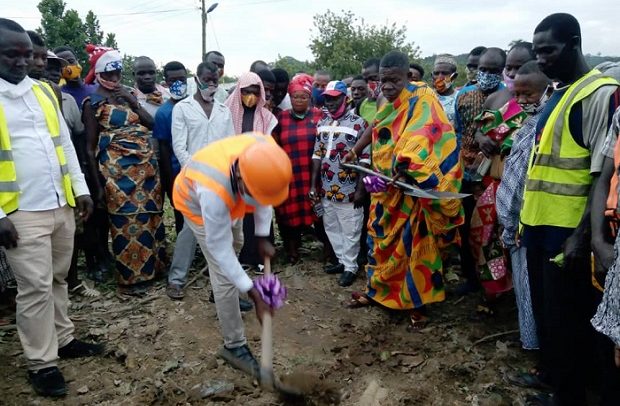 Kwasi Bonzoh cutting the sod for the project

THE District Chief Executive (DCE) for Ellembelle in the Western Region, Kwasi Bonzoh, has cut the sod for the construction of a three-unit classroom block for the Nzema Akropong community Junior High School (JHS) in the district.

The project, which will have offices for staff, a computer laboratory and a six-seater water closet toilet facility, is expected to be completed within six months.

It would cost the assembly GH¢450,000 and would be funded through the District Assembly’s Common Fund and the Ghana Education Trust Fund (GETFund), he disclosed.

The DCE said the assembly would also furnish the classrooms with furniture when it was completed; and added that they would take into consideration the protocols on social distancing.

According to Mr. Bonzoh, no government has constructed a classroom block for the community in the annals and history of the district, pointing out that all the school structures in the area were put up by the chiefs and people of the community.

“They themselves have managed to put up some structures as classrooms so their children will be able to attend school and learn.

“I visited the community during the 2012 electioneering campaign and the chief pleaded with me to build a modern classroom block and construct their road if my party, the NPP, came to power.

“I told them that when my party came to power, we would fulfil their heart desire,” he said and added that “what saddened me most was the poor performance of the JHS students presented to sit the 2019 Basic Education Certificate Examination (BECE).

“This was one of the motivating factors that made the assembly to provide the community with the facilities to enable the children to have a place to learn.”

He pleaded with the people to cooperate with the contractor in order to complete the project on time.

On the issue of road, the DCE said, “When we came to power all the major roads in the Ellembele District were nothing good to write home about. All the roads within the cocoa growing areas were not accessible.

“Now as I speak to you all the major roads, including the one from Esiama to Nkroful, are under construction.”