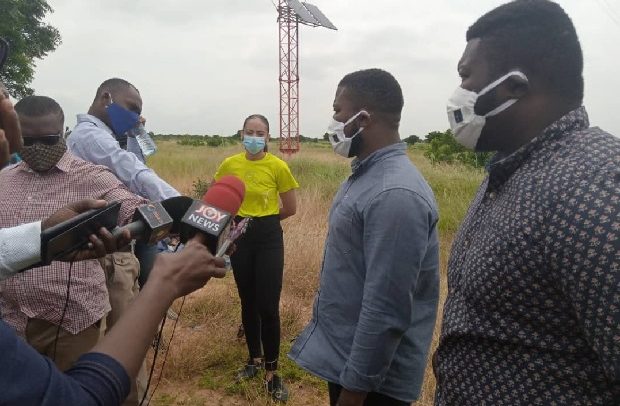 Officials of IES, and NEK briefing journalists at the Avitepa Wind Farm

Jasmine Kappiah, an officer from the Project Management wing of the Swiss-based engineering company, NEK Umwelttechnik AG, made this known to DGN Online during a media tour to some wind power generation stations in Prampram on Wednesday, July 15, 2020.

NEK has since 2003 been developing some wind farms in Ghana with the hope of supplying the national Grid.

One of the wind farm projects, she said, is the 225-megawatt Avitepa wind farm.

The development of the Avitepa project started in 2012.

The said project is located 40 kilometres from Accra South of the Aflao road around Dawa.

Avitepa project consists of up to 75 wind turbines with heights up to 140 metres on about a 1,000 acres of land, which is secured by NEK under a 30 years land lease agreement with the legal owners of the land, she said, adding that the investment volume is around $450 million and is backed by World Bank.

She stated that the project is two-phased, with a first constructed 150 megawatt and 75 megawatts in the second phase.

She explained that by the end of 2017, the project received all required permits to start construction, including a Power Purchase Agreement (PPA) with the Electricity Company of Ghana (ECG).

Since 2017, she noted that the Avitepa project has been awaiting green-light from Cabinet and Parliament for construction.

However, she said, the government has not provided the opportunity for that to happen.

Executive Director of the Institute of Energy Security (IES), Paa Kwasi Anamua Sakyi, recounted that the Finance Ministry indicated in the 2017 Budget that Government will facilitate the implementation of the project at least by 2018.

More than three years since then, he said, that has not been done.

He bemoaned a seeming lack of commitment on the part of governments over the years to the development and use of renewable energy in Ghana.

Ms Kappiah says the delay could be the overcapacity in the electricity sector of Ghana and commitments which the Ghanaian Government has with different Independent Power Producers (IPPs) such as Karpowership, Aska, Amandi, Ameri, Cenpower and others.

She claimed that while the other IPPs are producing their electricity using oil and gas and at a high cost to consumers, NEK’s wind farms, however, will produce electricity on a much cheaper level in a sustainable, environmentally friendly, CO2-neutral and home-made manner.

According to her, the Avitepa Wind Farm offered to ECG a selling price of 8.9 US Cents per kilowatt-hour, which she claimed is much less than any electricity producer in Ghana can offer.

She revealed that NEK has also initiated other wind farm projects including a 200-megawatt Konikablo Wind Farm which has an investment volume of around $400 million.

She indicated that the project which was initiated in 2014, once operational, will deliver more than 550,000 megawatt-hours of clean, reliable, cheap and home-made electricity.

According to her, NEK has signed a Memorandum of Understanding with ECOWAS for the export of cheap power from the Konikablo Wind Farm to other states such as Togo, Burkina Faso.

However, she said the Konikablo Wind Farm still expects a few authorizations in order to be fully permitted.

She said NEK is in the process of acquiring the authorizations and that the construction for the power export would take off in 2022.

Meanwhile, Mr Sakyi urged the Ghanaian Government to prioritize the use of renewable energy.

He argued that the use of renewable energy was the best, efficient and sustainable way to go and thus Government must be committed to that. 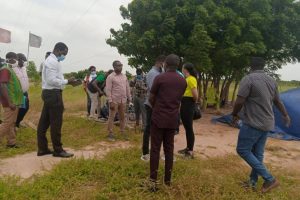 Re: Schools Would Be Shut Down IFf Covid-19 Rate Reaches 15%.