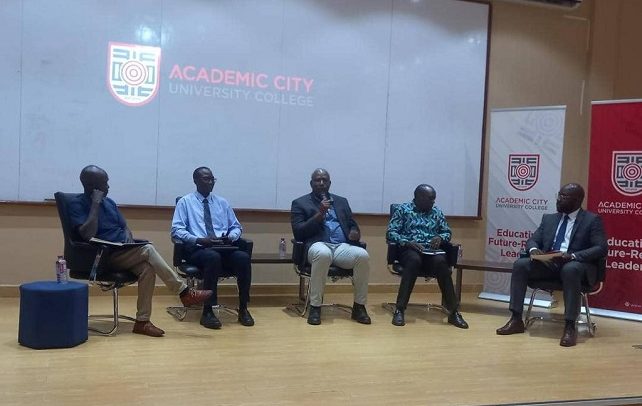 A panel discussion during the event

The Minister for Health, Kwaku Agyeman-Manu, has said engineers in Ghana are exploring avenues to develop some medical devices to help reduce the cost of imported medical devices.

He said that with the escalating cost of medical devices imported into the country, “We cannot afford to continue to look unconcerned without making any effort in developing the industry.”

He added that sustaining imported medical devices were a challenge since the capacity and expertise to maintain those did not reside with us.

“This, in the long run, reduces the lifespan of these imported devices which push the country into a cycle of escalating budget cost,” he stated.

The minister, who made this known at the launch of a locally-produced ventilator at the Academic City University on Monday, said the universal access to quality healthcare service, as enshrined in the road map for Universal Health Coverage by 2030, would not be compromised.

Mr. Agyemang-Manu, however, commended Prof. Fred McBagonluri, president of the Academic City University College, and his team, for the achievement saying it was a step in the right direction.

He said the ministry would follow such achievement where necessary and lend its support to the effort to propel Ghana into the era of medical device production.

Prof. McBagonluri said the production of the local ventilators showed that “We can produce locally and reduce the cedi as we seek more dollars in importing these medical devices from abroad.”

He stated that he has been in the space of engineering for many years and that what he and his team did was to bring to the fore challenges in remote places in the country where there was no electricity.

“When you go to these remote areas, there is no electricity there, so the question is how then we treat a patient who is under a strong pulmonary attack and needs to survive,” he detailed.

He, therefore, appealed to the government to encourage the production of bio-medical equipment onto the market and also provide sustainable funding for such projects.