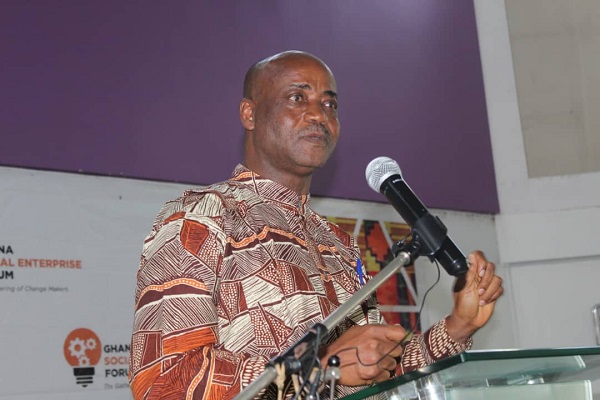 ISSA OUEDRAOGO, Founder of B-BOVID Company, has expressed worry at how some ‘fake’ investors were milking farmers in the country’s agricultural sector.

According to him, the country has over the years suffered at the hands of institutions and people who manned the agricultural value chain.

Ouedraogo, who disclosed this when he addressed participants at the Ghana Social Enterprise Forum organized Friday at the British Council, Accra, said he has had terrible experiences and practical issues with all the aforementioned in the last 17 years. Speaking on the theme: ‘Partnerships for sustainable development: social enterprises as catalysts for inclusive growth in Ghana,’ he

pointed out that foreign direct investment into Ghana’s agricultural sector appeared good in the books, but lacked clarity, conformity, and integrity.

According to him, indigenous lawyers and local banks allegedly connived with the unscrupulous people to milk the agricultural sector dry, hence the weak performance of agriculture.

Ouedraogo, continued that until the Government identified such abnormalities which silently created an avoidable lacuna along the value chain of the agricultural sector, and stemmed those, nothing significant would be achieved because the pockets of individuals fronting for the unscrupulous investors would continue to have their way through.

He said the government must consider investigating the modus operandi of such firms to ascertain if indeed these companies were decent enough and did not hold Ghana sway.

In his quest to promote peri-urban farming, the social enterprise entrepreneur, said he initiated in 2012 the Ghana Peri-urban Vegetables Value Chain Project (GPVVCP), a subsidiary project under GCAP, being funded by a grant of US$2.85 million from the Japan Social Development Fund (JSDF) through a Trust Fund Arrangement with the World Bank.

The project is being implemented by the Ministry of Food and Agriculture.

He, therefore, cautioned all stakeholders working in the agricultural industry to guard against entertaining diatribes, selfishness, excessive greed, and ignorantly promoting the operations of unscrupulous investors.

He further advised the central government to create an opportunity for all the above-mentioned issues to be investigated to save the country from sinking further under the guise of foreign direct investment.

‘Govt Promoting Use Of Cleaner Fuels’