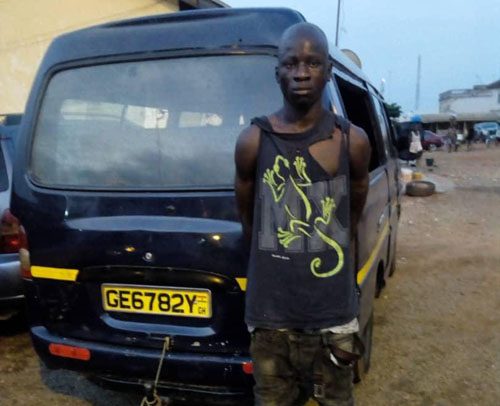 AN EX-CONVICT, Gibril Saeed Mohammed, is in deep waters after being grabbed by the police for stealing a stationary vehicle at Konongo.

Mohammed, who was driving the stolen vehicle, was quickly nabbed but his accomplice, one Awudu, escaped. The incident occurred around 4am on Monday.

A police extract, sighted by DAILY GUIDE, said Kwabena Agyapong – the owner of the car -reported the theft to the Konongo police on Monday.

It said all other police stations in the Ashanti Region and the nearby regions had also been duly informed to be on the alert.

According to the extract, the Tafo Pankrono Police interrogated Mohammed and he confessed that he stole the car at Konongo.

The suspect and the stolen car were therefore taken to Konongo for the police in the area to handle the matter.