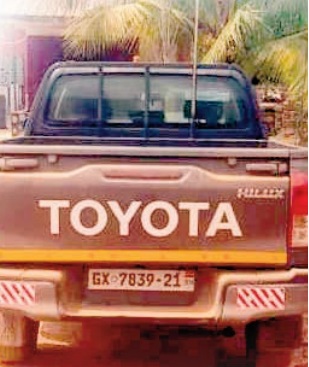 Emerging details from a security source indicate that the truck whose explosive cargo detonated recently at Apiate near Bogoso in the Western Region was escorted by a police officer in an accompanying Toyota Hilux with registration number GX 7839-21.

The above detail is at variance with what the Chief of Bepoh in the Huni Valley Municipality, Nana Atta Kojo Bremebi, put out recently to the effect that the truck did not have an escort, a standard procedure for trucks carrying dynamites and other explosive materials used at mining sites.

The source pointed out that an application was sent to the law enforcement department regarding the movement of the explosives to the mining site.

Of the over dozen persons who perished in the unfortunate incident, the source added that most of them came from nearby settlements, persons who had stormed the accident site to catch a glimpse of the mishap when they were consumed by the ensuing explosion.

Continuing, he said that “the initiative taken by the police escort and the driver in alerting a nearby school about the looming tragedy, the story would have been different.”

He added that “only one person from the village died in the tragedy, the rest being persons from nearby settlements who had trooped to the place to have a look at the aftermath of the accident.”

Escort vehicles performing such tasks are not the usual police marked cars with blaring sirens, the source said.

The source continued that the motorcycle indeed got under the vehicle carrying the explosives, causing the accident which ensued.

The driver and the police officer took the initiative to proceed hurriedly to the nearby school to have them flee the place before the devastating explosion.

The immediate aftermath of the explosion was characterised by confusion and the police had to step in to take control of affairs.

“There was a leadership vacuum and for the police intervention which provided leadership, things could have been worse than the country witnessed,” the source told DAILY GUIDE.

A fortnight ago, the country was stunned by an unusual tragedy when a truck bearing explosives and heading for a mining site in the Western Region had its contents blown up in an explosion which consumed over a dozen lives.

The chief’s claim came up when the Minister of Lands and Natural Resources, Abu Jinapor and the Minister of Works and Housing, Francis Asenso-Boakye visited the scene of the tragedy.