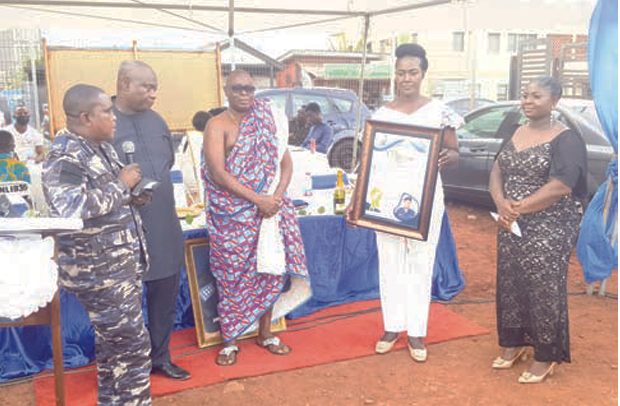 It was all joy when senior police officers including Superintendent Alhaji Abdul Latif Ngbonwura, DSP Togbe, the Crime Officer and DSP Ocansey, the MTTD Officer joined other senior police officers, traditional leaders and other invited guests to celebrate the man they described as a professional, hardworking and dedicated officer who served the people of Osu for the past 19 years.

Amidst danceable tunes, the officers danced in praise of God for a successful retirement of their station officer.

In an address by the District Commander, Superintendent Alhaji Abdul Latif Ngbonwura described the outgoing Chief Station Officer as a fantastic person who related well with all persons who came his way.

Nii Nortey Adumuah Osiahene IV, Osu Mantse, who attended the event on behalf of the people of Osu, revealed that plans are far advanced for the Osu stool to build a befitting accommodation for the Osu Police.

He pledged their support in fighting crime within Osu and its environs.

ACP Abraham Acquaye, Nima Divisional Police Commander, who doubles as the regional welfare chairman, made a presentation on behalf of the police administration.