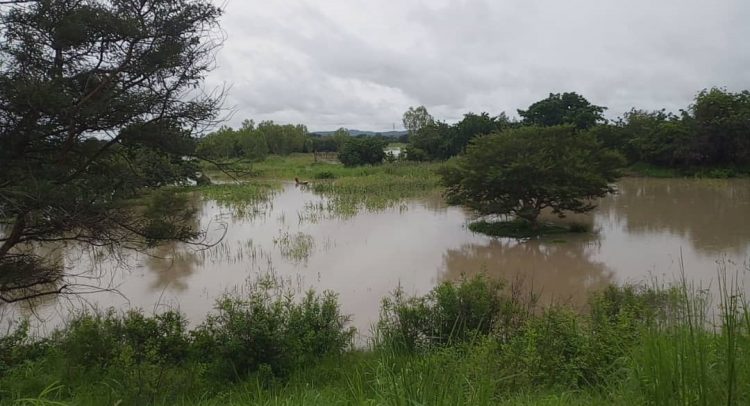 Shots of flooded farms along the White Volta

The Bawku West District Coordinator of the National Disaster Management Organization (NDAMO), Daniel Anania Atampuba, says a total of 1000 farmers in six communities in the district, have had their crops destroyed by flood as a result of the overflow of the White Volta, which passes through the district.

In recent times, the levels of various water bodies in the Upper East Region have increased. For example, the White and Black Volta Rivers have overflown their banks due to continuous rainfall and silted water ways.

According to the District NADMO Coordinator, lives have not been lost in the district as a result of the floods, but he disclosed that the level of destruction caused to crops and other property belonging to the people in the district was heartbreaking. He urged farmers to always abide by the education given them ahead of every farming season. He also urged property developers to always choose higher grounds and desist from building on waterways.

Every year, NADMO, with support from the Information Services Department and local radio stations, cautions farmers not to farm close to the various water bodies, but they always ignore this advice, claiming those lands are fertile with the availability of water for their crops.

For over three years, farmers in the Bawku West District who farm close to the water bodies have had their crops destroyed by flood resulting from continuous rainfall or the opening of the Bagre Dam in Burkina-Faso.

The District Chief Executive for the area, Victoria Ayamba, is afraid that the destruction caused to the crops could affect the outcome of the ‘Planting for Food and Job’ programme in the district and can possibly lead to food insecurity in many homes in the six affected communities including those who depend on the affected communities for food supply.

Meanwhile, DAILY GUIDE has learnt that some other crops planted close to the White Volta River in the Talensi and Nabdam Districts in the Upper East Region have also been destroyed by flood.

Experience The Best Eco-Tourism In Ghana