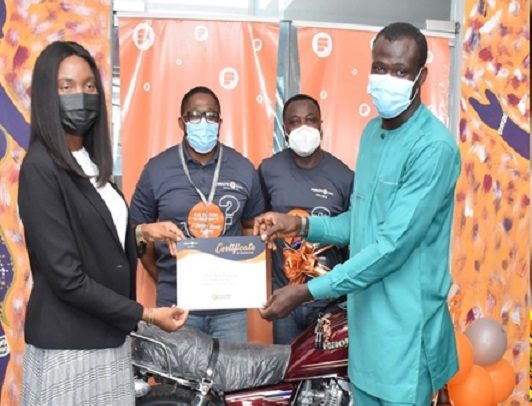 The business won a motor bicycle and a certificate of recognition.

This was after the bank had held agent engagement fora in Tamale, Kumasi, and Takoradi with the final one in Accra for both Accra and Eastern territories at Atinka Village.

Themed “Mitigating Risks in the Agent Banking Business”, the best agents from each of the five territories were also presented with certificates and Samsung 32” smart TVs. The first runners up received Nasco double-door fridges, while the most improved agents were awarded with LG sound systems. The best agent attendants went home with microwaves.

Nana Esi Idun-Arkhurst, Divisional Director, Retail Banking of Fidelity Bank Ghana, pledged the bank’sunflinching support to Agents and commended them for their significant contribution to the successes chalked by the bank; most notably their contribution to Fidelity’s financial inclusion drive.

“We appreciate the milestones our Agents have achieved as they have boosted financial inclusion in many communities. To ensure that this trend continues, Fidelity Bank is committed to improving our agency banking operations so that we can better serve even more customers,” she stated.

Nana Esi added that Fidelity Bank will keep expanding its agent network to bring banking closer to the doorsteps of Ghanaians and she noted that the bank also intends to create employment for more Ghanaians across the country.

Addressing the Agents, Fidelity Bank’s Head of Agency Banking, Dr. David Okyere, stated that, “Key amongst our 2022 initiatives will be ourAgent Promotion campaign as well as the introduction of our Agent locator feature; a tool on the Fidelity Mobile App that will show the locations of all Fidelity Agent Points across the country.”

Dr. Okyere also noted that after a successful pilot programme, the bank will this year begin to offer liquidity support to agents.

Fidelity Bank was adjudged the 2021 Agency Banking Bank of the Year at the 2021 Instinct Business Finance Innovation Awards and is currently the market leader in agency banking in Ghana.