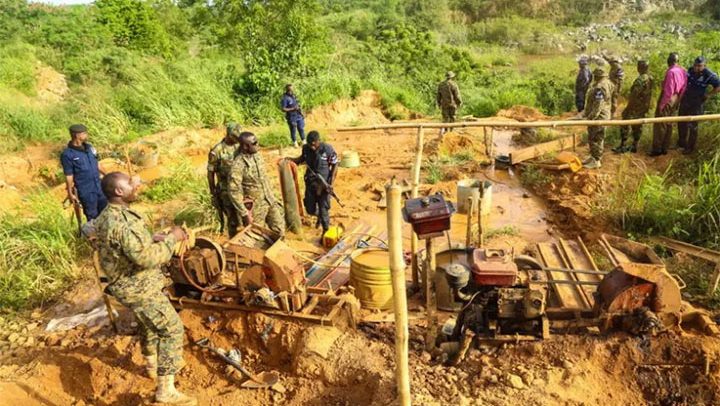 THREE main arguments are parroted out when the issue of effectively ending the galamsey madness in Ghana is brought up.

The first, usually canvassed by politicians, is that their loyal constituents are often so poor that they come to the politicians to beg for money.

They corner say, “Honourable, things are tough now oh! You learned people say that Covid-19 is the cause of it all. Also, you say, there is a war in “Youcry” that is affecting prices! But if someone known to poor people like us says, “Please close your eyes when unusual activities occur near your farm or stream. It will be us! And here is GHC200 to help you shut your eyes — what are we supposed to do? Send him away? Report him to the police for trying to stop my family from dying from hunger?”

The argument is strengthened by an unmentioned consideration, namely, “Don’t forget that you can only continue to be an “Honourable”, if we vote for you!”

The second argument goes like this “You want the Government to send the military and the police to use brute force to arrest galamseyers and burn their excavators, bulldozers and other mining equipment. But these are our own people. If you catch Chinese people with them, they have been brought because they have greater technical knowledge.” Now, Ghana boasts of being a practitioner of the Rule of Law. In burning excavators and other machinery without a court order, are you not violating the sanctity of the owner’s right to own property and not be deprived of it except by a court of law?”

The third argument runs as follows: “You make so much noise about the Chinese being involved in galamsey. You are exposing them to public ridicule.

Yet Ghana is supposed to be one of the most hospitable countries in the world. Aren’t you destroying that reputation by the rough treatment the Chinese are getting? Won’t that also affect Ghana’s relations with China when it comes to loans for projects?

Before you read my answers to those questions, I would like you to experience the REALITY of the galamsey situation in our country so that any sentimental planks in your eye that can create illusions in you will be removed. Please go to the Internet and open the following web-links:
1. https://youtu.be/JKTkQrBhRUk 4. https://youtu.be/gln20eFiWLE
2. https://youtu.be/z5L1LVr-c5Q
3. https://youtu.be/z5L1LVr-c5Q
5. https://youtu.be/gln20eFiWLE
Now, let me answer Question One: in life, we all have to make sacrifices sometimes. In choosing to become a Minister, or Member of Parliament, or a District Chief Executive or an Assemblyman, you have decided – in fact sworn– to put the national interest of Ghana above ALL other considerations, including your own personal interests and those of your relatives and friends. The term, “our own people” ought to be outlawed from your thinking: it is the people of Ghana, as a whole, who are “your own people.”

Now, it is patently clear that excavators, bulldozers, changfans and chemicals, when used in rivers and water-bodies to win gold, destroy the water-bodies and also, through subterranean pollution, affect the quality of the produce from our food and cocoa farms, as you, no doubt, would have seen with your own eyes from the films on Youtube to which I directed your attention earlier.

As I maintain, we all have to make choices in this world. And in this case, our choice is stark: either we use unorthodox but effective methods to PREVENT GALAMSEY going on, or we allow sentimentality to make us close our eyes to it and find that in the next few years, MOST of our water-bodies have become poisoned in such a way that we drink them only to attract diseases into our bodies, and deform the genes which we pass on to our offspring. Once they enter your body, genetic diseases, as you probably know, mutate from generation to generation. Already, there have been reports that some Ghanaians in the galamsey-ridden areas, are giving birth to children without eyes and noses.

Anyway, when our country runs out of water that’s safe to drink, where will we find water to import (assuming we can afford to do so):
Regarding the Rule of Law, in times of national emergency, even the most fervent champions of the Rule of Law, change their attitude to its sacred principles. During the Second World War (for instance) the United States Government found it necessary to round up and incarcerate in prison camps, Japanese residents in America, as well as other “enemy aliens.” These poor prisoners were not tried and so could not plead their innocence of the Americans’ charge that they might be sympathetic to the cause the Americans were fighting against!

The British, for their part, imprisoned politicians in Northern Ireland without trial under a system called “internment”. Some Irish politicians were killed in cold blood by the “Royal Ulster Constabulary” and British soldiers. The murders occurred not only in Northern Ireland but in foreign countries (as in Gibraltar in! 988).

As for relations with China, China and Ghana are sovereign states which enact laws for the welfare and economic advancement of their peoples.

Neither country can force the other to allow its citizens in the other (host) country to break the laws of the host — a la the ongoing Aisha Yuang case — with impunity.

Sovereignty, whether in Ghana’s case or that of any other country, is simply NOT NEGOTIABLE! Ask the Chinese what they think of the American domination of Taiwan – an island far away from the Chinese mainland, but which the Chinese have been claiming as their own for over half a century!
We have a clear duty to end galamsey. Let us carry out that duty. Without fear or favour.