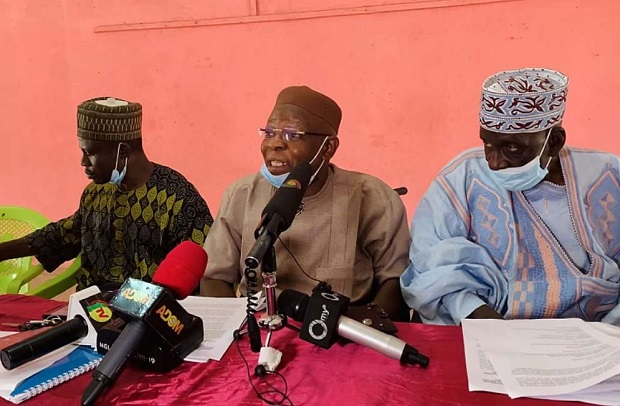 The leadership of the community during the press conference

THE FULANI Community in Ghana has expressed dissatisfaction over what it described as “exclusion” of the Fulani ethnic group in the 2021 Population and Housing Census (PHC).

The Ghana Statistical Service (GSS), according to the community, classified the Fulani ethnic group as “All Other Tribes” in the PHC questionnaire for the upcoming census which begins this week.

However, reacting to the development, the Acting Executive Director of the Centre for Fulbe (Fulani) Affairs and Security, Gedel Ahmed Mohammed, at a press conference in Accra on Monday, described the omission of the Fulani Community in the census as “unacceptable, untenable and discriminatory.”

He established that the Fulani Community has existed in Ghana for over 400 years in the remotest part of all sixteen regions and must be respected and counted by name like any other ethnic group in the country.

He blamed their supposed exclusion from the census on “unfair perception and discriminative attitude” against Fulani and Fulani pastoral communities in Ghana.

Buttressing his claims, Mr. Mohammed said, “It is significant to note that, the Ghana population and housing census of 1948 captured the Fulani ethnic group at 20,000 and Fulani pastoralists in Ghana. The 1960 census further suggested that this number had risen to 25,050.

“According to the 2000 census, which is the most recent estimate, there were a total of 300,000 Fulani’s including pastoralists in Ghana (Ghana Statistical Service, 2002). These are strong affirmation that the Fulani ethnic group have always been part of the population and housing census in Ghana, by name. Why have we been exempted and classified under ‘All ethnic group’?”

Mr. Mohammed also argued that the contribution of the Fulani Community to the socio-economic development of Ghana cannot be underestimated saying, over 90 per cent of the Fulani population in Ghana are Muslims and have played active roles in nation building.

“It is worth noting that, the second lady is a Fulani. Indeed, the Adenta Constituency settled on Fulani as its MP in the 2020 election. There are several Fulanis working as doctors, engineers, lecturers, journalists and artisans who play active roles in developing our dear nation. Yet official statistics tend to overlook many important economic benefits of Fulani Community in Ghana,” Mr. Mohammed stressed.

The community went on to among others, propose to government and the Ghana Statistical Service to endeavour to use the census to generate a reliable data to accurately define key demographic parameters, of Fulani communities which must be mainstreamed at the level of government policy making and policy interventions.