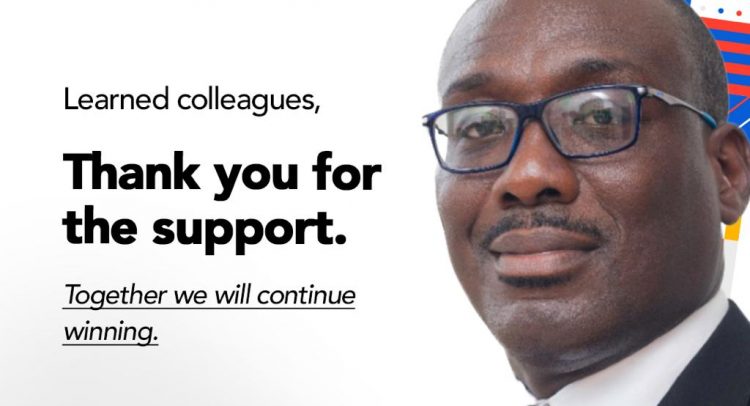 The outgoing National Secretary of the Ghana Bar Association (GBA), Yaw Acheampong Boafo, has been elected President of the Association.

The 50-year-old Kumasi based lawyer beat his only contender, Efuah Ghartey, 55, wife of former Railway Development Minister, who is a second timer in the presidency contest having contested the 2018 election.

Mr. Boafo will succeed Anthony Forson under whose administration he served as National Secretary.

The election of National Executives is one of the highlights of this year’s Annual General Conference held in Bolgatanga in the Upper East Region.

The total votes cast was 1,149 representing 89.84 percent of registered members of the bar who voted manually and electronically on Wednesday September 15, 2021.
Mr Yaw Boafo polled 605 votes to emerge victorious over Efua Ghartey who had 540 votes.

Meanwhile, Kwasi Amoako Adjei got 656 votes to defeat Yaa Onyameye Gyakobo who got 486 votes for the position of the National Vice President.

For the post of the National Treasurer, Nana Serwaa Acheampong polled 694 against her contender, Dr Adu Anane Antwi who had 438 votes.

The new leaders are expected to steer the affairs of the GBA for the next three years.

A handing over ceremony is scheduled to take place in November this year.

Yaw Acheampong Boafo is the Partner in charge of the Kumasi office of S.K Boafo and Co, his father’s law firm.

He became a member of the firm after he was called to the Bar of England and Wales in 1994 and enrolled on the Roll of Lawyers in 1995.

He has managed to shape and grow the firm with about 24 lawyers with offices in both Kumasi and Accra.