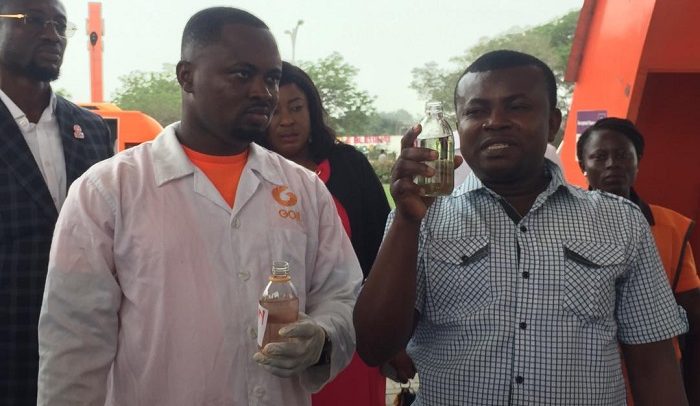 Ghana has commenced the sale of a higher grade petrol, the Researched Octane Number (RON95).

RON95’s introduction has paved the way for GOIL Company to move away from the sale of RON91, which is a lower grade petroleum product.

It is expected that RON95 will benefit consumers immensely by boosting the performance of their engines.

COPEC is now in talks with other OMCs to follow the footstep of GOIL.

Octane Number is the standard
measure of the performance of an engine or aviation fuel.

It is believed that the higher the octane number, the more compression the fuel can withstand before igniting.
.
Head of Fuels Marketing, GOIL Company, Marcus Deo Dake, addressing journalists at GOIL filling station at Burma Camp, Accra, on Monday, February 17, stated that customers would not be charged extra money for being served the RON95.

According to him, they will be paying the same amount they were were paying for RON91.

He indicated that “RON 95 is a cleaner product and good for the environment.”

Ghanaians deserve the best in the fuel industry and that GOIl will not do anything different in giving Ghanaians the best.

OMCs in Ghana have for several years been marketing RON91, while Western Nations, especially those in Europe, have moved to RON95 and RON97.

Malaysia for instance, is among the several Asian nations that are using RON95 and RON97.

Duncan Amoah, Chief Executive Officer of (COPEC Ghana), who inspected a number of GOIL stations on Monday in Accra, to ensure that RON95 was actually being sold, octane 91 is weaker than 95.

He recounted that the standard for octane rate was set in the 1990s, and it was agreed that the country should do a minimum of RON91.

According to him, in the 90s if refineries in Ghana could not do 95, it would have needed retooling.

He stated that 91 was convenient in the 1990s because most of the vehicles in Ghana were not having the kind of sophistication existing today.

Mr. Amoah revealed that Ghanaian refineries are no longer putting as much fuel on the market as expected and that most products are imported from refineries across Europe.

Again, he said most cars in Ghana are post 2010 and are highly sophisticated as compared to those in use in the 1990s.

That, he said, means that Ghana cannot continue to stick with the RON91