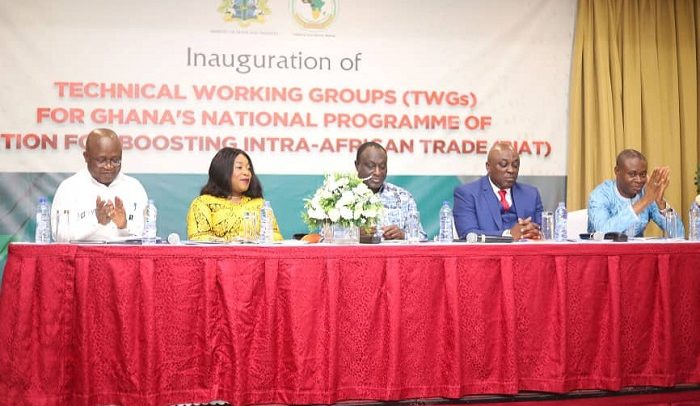 The groups were constituted as part of the Ministry of Trade and Industry’s preparation for the implementation of the country’s National Program of Action for Boosting Intra African Trade under the African Continental Free Trade Area Agreement.

Minister of Trade and Industry, Alan Kyerematen, inaugurated the groups on Monday, February 17, 2020.

Speaking at the inauguration ceremony held at the Alisa Hotel, Minister of Foreign Affairs and Regional Integration, Shirley Ayorkor Botchwey, said the technical working groups are to ensure
the effective implementation of Ghana’s National Programme of Action for Boosting Intra-African Trade.

As host of the AfCFTA Secretariat, she stated that “Ghana is committed to providing the necessary facilities and tools to ensure that the objectives of the AfCFTA are achieved.”

“I am happy to announce that at the just-ended 33rd Ordinary Session of the Assembly of Heads of State and Government of the African Union, I signed the Host Country Agreement for the establishment of the AfCFTA Secretariat in Ghana,” she observed.

According to her, “as you may be aware, at the same Session, the Assembly of the African Union, elected Mr. Wamkele Mene, former South African Head of Mission to the World Trade Organisation and South Africa’s Chief Negotiator in the African Continental Free Trade Area negotiations, as the first Secretary-General of the AfCFTA Secretariat.”

These developments should encourage all of us to work hard to ensure that trading begins in July 2020 as envisaged by the African Union, she noted.

“On our part as a country, our hope is that these Technical Groups being inaugurated today will work assiduously to ensure that Ghana’s interest in this trade arrangement is protected and advanced.”

Admonishing members of the groups to work hard, she noted that “you have been selected from your respective institutions to be part of these groups by virtue of your intellectual and technical competences.”

“The country is therefore depending on you to ensure that Ghana is not short-changed in this arrangement and that Ghana’s trade with the rest of the continent is beneficial to her citizens,” she said.