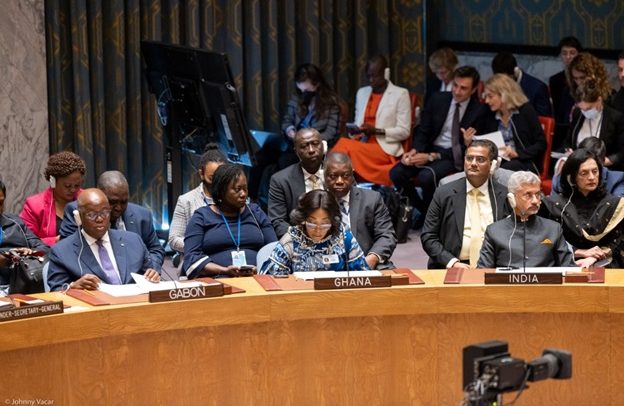 SHIRLEY AYORKOR Botchwey, Minister for Foreign Affairs, has indicated that Ghana is ready to work together with countries that share the Atlantic space, to curb the increasing incidence of piracy, oil theft, trafficking and smuggling of drugs, arms and people, as well as the unlawful dumping of hazardous waste in the sea.

She gave the assurance at the ministerial meeting on strengthening the Atlantic Cooperation in New York, USA, on the sidelines of the 77th UN General Assembly, where an initiative by 18 countries including Ghana, Senegal, Britain, Canada, Spain, and Norway, among others, has been made for cooperation in the Atlantic Ocean.

Ms. Ayorkor Botchwey described the initiative as timely and Ghana welcomed the objectives that seek to protect the marine environment and ensure sustainable exploitation of marine resources.

However, the Foreign Minister added that “Coastlines and territorial waters are equally fraught with all manner of dangers and insecurity that threaten our peace, stability, progress and the prosperity of our countries.”

She said Ghana, as part of its priorities and as a non-permanent member of the United Nations Security Council, has promoted multilateral action on the many other challenges that nations in the Atlantic Zone face.

To her, the increasing incidence of piracy and other criminal activities such as oil theft; trafficking and smuggling of drugs, arms and people; illegal, unreported and unregulated fishing (IUU), unlawful dumping of hazardous waste in the waters and perpetration of other environmental crimes, come at great cost to the people and economies around the world.

The minister was upbeat that a joint statement by states that form the Atlantic Cooperation would launch a process leading to a structured framework for capitalising on mutually beneficial opportunities for cooperation, including existing regional, sub-regional and inter-regional mechanisms.

US Secretary For Defence

On his part, the US Secretary for Defence, Anthony Blinken, said the US would devote another US$100 million next year to the effort, in addition to around US$400 million already spent each year on maritime initiatives in the Atlantic. He was hopeful that the additional investment coupled with commitments and cooperation of countries that share the Atlantic will go a long way to preserve the marine ecosystem and enhance lives of people who depend on the ocean.

According to the UN, one in five fish caught in the Atlantic comes from illegal fishing, translating into losses of up to US$23 billion per year. This harms coastal communities that rely on sustainable fish stocks for food and income. It also fuels corruption and threatens the health and biodiversity of the oceans.

Experts say countries which border the Atlantic cannot take for granted the free and open maritime trade that employs so many people, the undersea cables that connect the world, the fish stocks and wildlife that sustain the world.