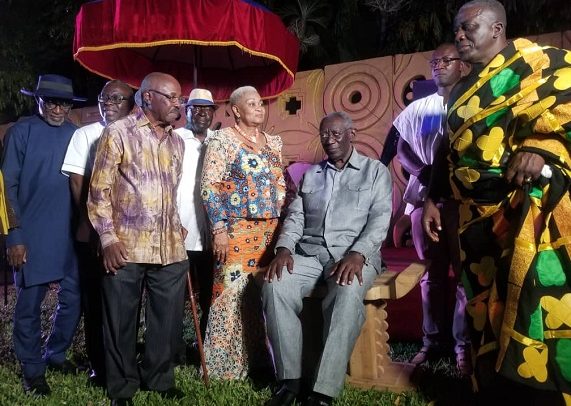 FORMER PRESIDENT John Agyekum Kufuor has been honoured at the Centre for Communication and Culture (CCC) awards as a visionary leader and an advocate for press freedom and right.

15 other legends of Ghanaian media were also honoured at the colourful ceremony last Wednesday in Accra.

The theme for the event was: “The Bold and Beautiful, The Ugly and Maverick.”

Conferring the honour, the organisers of the CCC awards, explained that, former President Kufuor in opposition campaigned for the development of media freedom against the oppressiveness of the dark days of the newspapers Licensing Regime and the Criminal Libel Law.

As President of Ghana (2000-2008), Mr. Kufuor sat against the anti-media laws with unwavering determination till he got them off the books of the Ghana legal system.

“Under you as president, Ghana broke free after decades of tyranny, with free speech and media right completely shackled, we honour you today for your support to Ghana’s press freedom,” the organisers said.

Mr. Kufuor was grateful for the honour done him and commended the CCC awards board and the media for their contribution to national development. He urged the press to fearlessly confront impunity and expose the wrongs in the country.

The event, characterised by glitz and glamour, brought together many stakeholders in the media landscape across the country, including some government officials such as the Deputy Minister of Information, Fatimatu Abubakar, Paramount Chief (Omanhen) of the Essikado (British Sekondi) Traditional Area in the Western Region, Nana Kobina Nketsia V and other dignitaries.

The 15 legends who were honoured for their contribution in fighting against the impunity of military government in an era known for its culture of silence were Kofi Badu, former Managing Director of Graphic Communication Group, and Elizabeth Ohene, former member for the International Commission of Investigative Journalists, Kwaku Sakyi Addo, Communication Specialist, former GJA President Ambassador Kabral Blay Amihere, Gifty Afenyi Dadzie, and ex-government official K.G. Osei Bonsu.

“The GJA retirees fund when launched and operational will reduce the sufferings on retirees and put smiles on their faces,” he said.

Mr. Dwumfour called on all well-meaning Ghanaians and foreigners, as well as corporate Ghana, to donate generously to the fund to support retirees in the country.

The Centre for Communication and Culture awards honoured the 15 legends of newsroom journalism and other promoters of free expression in collaboration with GJA, GBC, PRINPAG, and IPR.