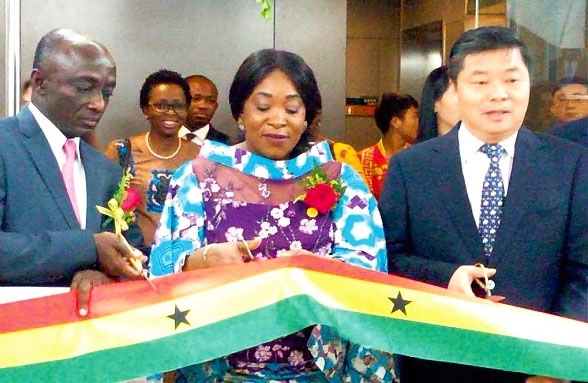 The Ghana Consulate General in Guangzhou, China, has described as unfounded allegations that the Ghana national flag was denigrated during the opening of the office last week.

National Democratic Congress (NDC) Member of Parliament (MP) for Kunbungu, Ras Mubarak, had alleged in a typical busy-body post on Facebook that the Ghana flag was mutilated during the ribbon cutting ceremony to signify the opening of the Consulate General office last Wednesday in Guangzhou and therefore officials involved, including the Foreign Affairs Minister, should be reprimanded.

“What the Minister for Foreign Affairs, our Ambassador in China and other staff of the Ministry of Foreign Affairs did in the attached photo constitutes mutilation of the national flag and is in violation of Ghana’s Criminal Offences Act 29 (1960), and the Flag And Arms Protection Act of 1959,” Ras Mubarak alleges in a post lapped on by NDC apparatchiks.

He even suggested raising the issue in Parliament. “In view of this, I intend to bring a half hour motion in Parliament with the view to having the minister answer for her actions,” Ras Mubarak indicated.

But the Consulate General, in a statement to set the records straight, said the allegation made by the MP was a figment of his imagination.

“The Consulate-General of the Republic of Ghana is very disappointed and wholly rejects the unfounded claim that the national flag was denigrated during the formal opening of the mission in Guangzhou.

“The imprint of national colours and symbols on ceremonial items used on such auspicious occasions do not necessarily equate those items to the flag,” the statement said.

“Besides, the ceremony in Guangzhou is not the only occasion when a banner with the national symbols has been used in a ribbon-cutting event,” the Consul General explained.

The statement indicated that the request to establish the consulate has been on paper for at least 10 years.  “The Foreign Minister, after her visit to China in June, 2018, worked hard within one year to ensure that Ghana gets a representation in Southern China to support Ghanaian businessmen/investors who do their business mostly in the Southern part of the country.  This is a commendable achievement which has been highly recognized by the Chinese authorities,” it stated.

It adds: “It is also important to point out that the ceremony was given a high recognition with the presence of the Vice-Governor of Guangdong Province, officials of the Ministry of Foreign Affairs from Beijing, Foreign Affairs Office in Guangzhou and other state officials which is normally not done”.

The Consulate General assures the good people of Ghana that it will not do anything to undermine the interest of the country but rather strengthen the already cordial relations between Ghana and China for the mutual benefits.