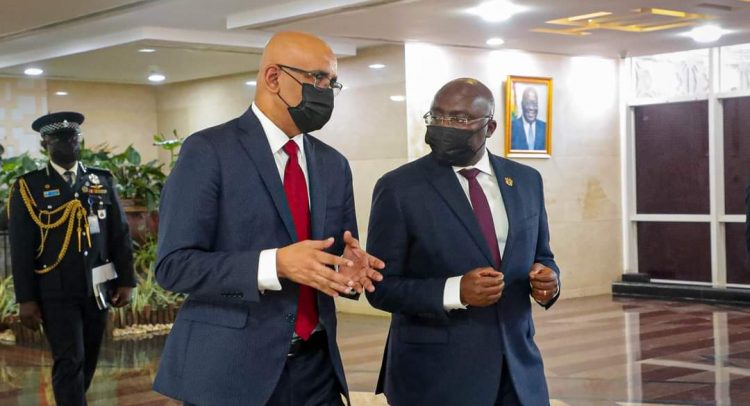 The two Vice Presidents at the Jubilee House

Vice President of Guyana, Bharrat Jagdeo came to Ghana last Friday together with a high-powered delegation, seeking to deepen existing cooperation between the two countries, with the petroleum sector high on the agenda.

At a meeting at the Jubilee House, Vice President Dr. Mahamudu Bawumia recalled the historical and cultural relations between the two countries dating back to the era of slave trade and assured of Ghana’s commitment to exchange practical development ideas with the Guyanese counterpart.

He cited the various agreements signed between the two countries, including the Mutual Visa Exemptions, Memorandum of Understanding on Mutual Investment Cooperation and an Air Service Agreement.

It was this cooperation between the two countries that, according Dr. Bawumia, was what made President Akufo-Addo to pay a state visit to Guyana in 2019 at the invitation of Guyanese President and backed with another meeting on the sidelines of the United Nations (UN) General Assembly in New York in September this year.

Dr. Bawumia said “we want to see our cooperation deepen beyond oil and gas. We want to look at sharing experiences in areas of agriculture, industrialisation, real estates and digitisation, which we’re really moving forward with, and they say, data is the new oil and we’re making progress in digitising the economy.”

“Economically, we have both gone through ups and downs, both of us were HIPC nations at some point before we discovered oil. We both have peaceful democracies and I want to commend you for the democratic progress you have made. Ghana is also seen as a bastion of democracy in Africa with peace and stability,” he added.

Dr. Bawumia noted that the visit of his colleague Vice President from Guyana to Ghana was essentially to build on the discussions the two countries have had already, as a catalyst to build the bond of friendship they have had over the years.

On his part, Vice President Jagdeo acknowledged the immense contribution of Ghana towards her independence struggle, saying, “Ghana is a great inspiration to Guyana and we recognise the role she played in that endeavour.”

He underscored the need for both countries to coordinate their positions on issues of fossil fuel exploration and exploitation at the international arena so that the natural resources would be utilised to transform lives.

On Ghana’s side were officials from the Energy Commission, Ghana National Petroleum Corporation and the Ghana Gas Company.

As part of the visit, the Guyanese Delegation visited the Kwame Nkrumah Mausoleum to lay a wreath and planted a tree at the site, visited the offices of the Petroleum Commission at Dzorwulu, and held discussions with players in the private sector.

Guyana is one of the poorest countries in the Americas.

Thirty-five percent of the Guyanese population lives below the poverty line, with indigenous people being disproportionately affected.