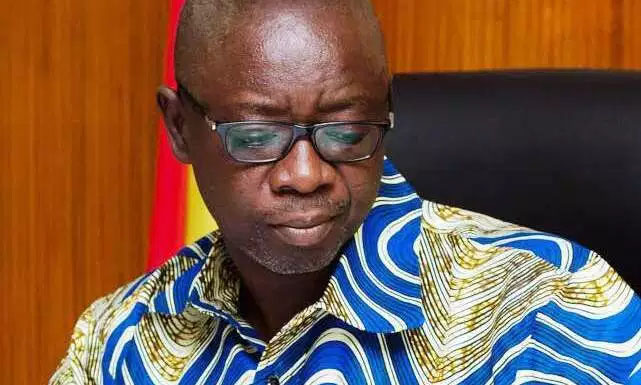 It has turned out that Management of the Ghana Manganese Company Limited (GMCL) deliberately ‘misled’ government when they informed the Lands Minister, Kwaku Asomah-Cheremeh, that their weighing bridge had developed a fault and was under repair.

Mr. Asomah-Cheremeh had, based on what the Company’s management told him, misinformed the public in an interview with TV3.

He had told TV3 that the Company’s weigh bridge had developed fault and was being repaired.

But it turned out that the Company has not had any weigh bridge since it commenced operations in Ghana.

This came to light when the Minister and officials of Minerals Commission visited the Company in Nsuta on Tuesday, August 13, 2019.

Aggrieved workers of the company told the minister that the information he gave to TV3 was fake, noting that the company did not have any weigh bridge that had developed a fault.

According to them, it was recently that the company brought in a weigh bridge which was still being installed.

The Minister then clarified that the information he conveyed to the public was from the management of the company.

GMC owns and operates the Nsuta manganese mine in the Western region of Ghana.

GMC holds a mining concession for manganese over an area of 175 square kilometres in and around Nsuta in the Western Region of Ghana.

About a week ago, Government through the Minister of Lands and Natural Resources, Kwaku Asomah-Cheremeh, asked GMCL to stop all mining, exploration and export of minerals with immediate effect for causing alleged $360 million financial loss to the State.

The absence of the weigh bridge purportedly means that the actual amount of manganese exported by the company cannot be ascertained, with some analysts saying the state could have even lost more than $360 million.

Government four days later ordered GMCL to resume its operations, in a statement.

The decision, according to the statement, was taken after a two-day meeting between officials of government including the Ministers of Lands and Natural Resources and Environment, Science, Technology and Innovation, and GMCL on 6th and 9th August.

The meeting also involved top officials of Minerals Commission, according to the statement.

The statement indicated that it was agreed during the meeting to expedite action towards resolution of the issues raised.

“In light of the good faith shown by the company to work with government towards amicable resolution, including the joint manning of the weigh bridge and tonnages loaded unto ships to guarantee accurate computation of revenue, I have asked the company to resume its operations,” Mr. Asomah-Cheremeh said in his statement.

But the workers told the minister on Tuesday that his approach in shutting down the company was completely wrong.

However, the Minister indicated that it was not government’s intention to ‘destory’ Ghana Manganese Company.

He said Government was mindful about the need to protect the employments of the about 400 direct workers and 600 indirect workers.

Meanwhile, a 10 member committee has been formed to reconcile the facts presented by government and the company on the matter so far.

The committee comprises members of the Ministry, Minerals Commission and Ghana Manganese Company.

It has a 10- day period to submit its report.