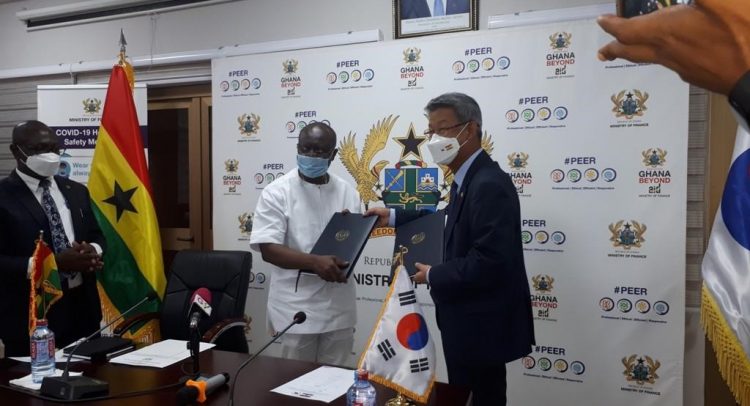 Ghana on Tuesday, signed a Framework Arrangement (FA) with the Government of the Republic of Korea, concerning the concessional loans from the Economic Development Cooperation Fund (EDCF) for the years 2020 to 2022.

Finance Minister Ken Ofori-Atta, signed on behalf of Ghana, while Korean Ambassador to Ghana, Kim Sungsoo signed for his country.

Mr Ofori-Atta explained that the concessional loans being provided to Ghana from the EDCF under a three-year funding cycle referred to as the FA, was delivered through Korea Eximbank.

He said under the agreement the Korean Government was committing the sum of $400 million towards the implementation of a number of development projects.

According to him, the doubling of the amount was in response to $1 billion support request made by Ghana’s President Nana Addo Dankwa Akufo-Addo.

Mr Ofori-Atta expressed the Government’s appreciation for this marked increase, while it continued to look forward to future envelope that matched the $1billion request made by the President.

He said following a request by the Finance Ministry, the Embassy of Korea had also agreed to expand the four priority sectors in the current CPS (2016 to 2020).

It will include information and communication technology and transport sectors for the upcoming Country Priority Sectors (CPS) spanning between 2020 and 2025, and thanked the Korean Government for aligning their resources to Ghana’s priorities.

Mr Ofori-Atta said over the last three years, prudent steps were taken to create an enabling environment for the private sector to flourish, citing the introduction of tax reforms as a key factor.

Inflation was at 10.4 per cent in September, 2020, while interest rates of 13.55 per cent per the Monitory Policy Rate were on the decline, and the exchange rate had also been stable while debt was being managed under sustainable levels, he said.

He however, said just as other countries, COVID-19 had had its negative impact on Ghana’s economy.

“But some proactive initiatives taken by the Government such as the COVID-19 Alleviation, and the Emergency Preparedness Response Programmes respectively, were effectively implemented to alleviate the impact of the pandemic on Ghanaians,” he said.

He said under the Ghana Cares programme, the Government had also initiated the ambitious GHC100 billion COVID-19 Alleviation and Revitalization of Enterprises Support, to stabilize and revitalize the economy through continued provision of reliefs, in the short-term, and accelerating the Ghana Beyond Aid economic transformation agenda in the medium term (2021 to 2023).

Mr Ofori-Atta thanked the Korean Government for support and expressed the hope that the gesture would go a long way to deepen and broaden Ghana-South Korea bilateral relations for the mutual benefit of the two countries.

Ambassador Sungsoo, said Ghana and Korea had enjoyed a bilateral relationship that dated over 40 years and it was hoped that this friendship would flourish and yield good results for generations to come.

He noted that the agreement could be a significant milestone in the ongoing collaboration to further strengthen the relationship and enhance the friendship.

According to him since 1990, nine projects amounting to $354 million had been funded by EDCF in Ghana.

These included; the $55.5 million Wa Water Supply Development, the $67.2 million Prestea-Kumasi Power Enhancement, establishment of the University of Environment and Sustainable Development at Bunso valued at $90 million, as well as the $68 million Northern Ghana Rural Electricity Infrastructure and Access projects respectively.

It is hoped that the five new projects under the Agreement would support the health and economy of Ghana, and drive a new wave of world-class developments, he said.

Ambassador Sungsoo stated that the world was changing fast, and encourage Ghana to catch up with the forerunners as soon as possible, to bring prosperity, welfare and happiness to its people.

He said Korea was a proof of this endeavor, and Ghana could do better by avoiding the trials and errors made in the past, and that Korea country was ready to run together with Ghana to achieve the Ghana Beyond Aid agenda.