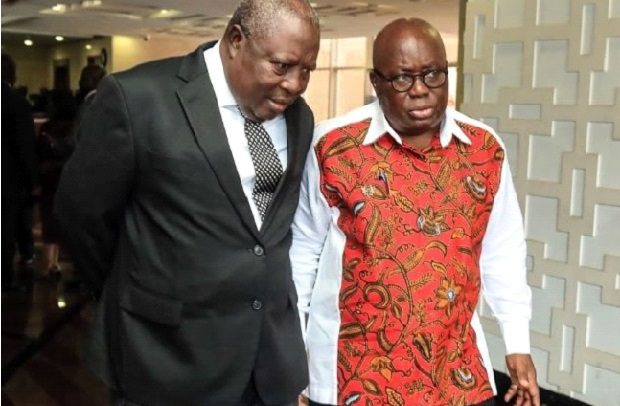 President Nana Akufo-Addo has dismissed claims by the immediate-past Special Prosecutor, Martin Amidu, that he interferes with his investigative work.

Mr Amidu, it would be recalled, on Monday, November 16, 2020, tendered in his resignation in a letter addressed to Mr Akufo-Addo.

In the letter, Mr Amidu, among other things, accused the President of interfering with investigation works into alleged corruption cases.

He mentioned for instance that the President sought to interfere with his corruption risk investigation into the controversial Agyapa Royalties deal.

But the President, through his Secretary, Nana Bediatuo Asante, has responded to each of the claims made against him by the Mr Amidu.

In a letter addressed to Mr Amidu and signed by Mr Asante, the President made it clear that throughout the tenure of Mr Amidu, he (Mr Akufo-Addo) nor any member of his government interfered or sought to interfere with his work.

According to the Presidency, in Mr Amidu’s letter to the President dated October 16, 2020, he stated, in part in relation to the novel nature of the report on the analysis of the risk of corruption and anti-corruption assessment of the gold royalties monetization transaction that “this has been made possible by the courage and commitment of H.E. the President of Ghana on redeeming the promise he made to Ghanaians when he was a Presidential candidate of a political party to establish an independent anti-corruption statutory entity to male meaningful any real commitment to prevent and fight corruption.

The Presidency stated that on August 3, 2020, Mr Amidu in a letter to the Chief of Staff at the Office of the President, noted that “I have remained in this Office this long out of personal respect for the President’s shared commitment with me to fight corruption.”

Thus, the Presidency says it found it surprising that Mr Amidu will come out to question the commitment of President Akufo-Addo as far as the fight against corruption is concerned and even go on to accuse him (Akufo-Addo) of interfering with investigative works into alleged corruption cases.

The Presidency could not also understand why even before the President had been given the opportunity to reacts to the contents of Mr Amidu’s four-page letter, it had been circulated into the public domain prior to receipt by Mr Akufo-Addo. 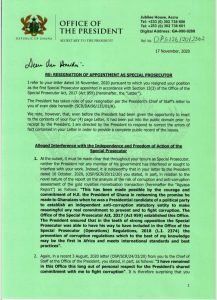 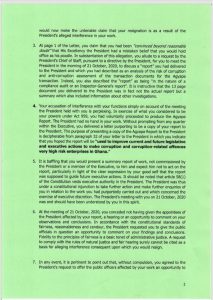