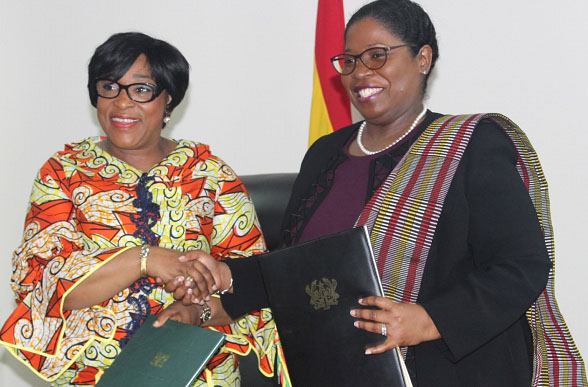 The governments of Ghana and Suriname have signed bilateral agreements to effectively enhance economic cooperation for mutual benefit.

The four agreements focused on a Memorandum of Understanding (MoU) on the establishment of a political consultation mechanism between the Ministries of Foreign Affairs of Ghana and Suriname and visa exemption for holders of diplomatic and service passports of the two countries.

A roadmap of the programme for cooperation from 2019-2023 between the governments of Ghana and Suriname and a letter of intent for cooperation and collaborations in the field of diplomacy and international relations was also signed.

She emphasized the need for the establishment of a Ghana-Suriname permanent joint commission for cooperation, which is the ideal framework for the agreements signed between the two countries.

The sector minister urged the two countries to go beyond the agreements to initiate trade-related instruments such as agreement on the avoidance of double taxation and bilateral investment treaty to guarantee investments for both economies.

Ms Botchwey further extended an official invitation to the people of Suriname to participate in the ‘Year of Return’ activities aimed at fostering Diaspora relations.

She lauded the opening of the embassy of Suriname in Ghana and expressed Ghana’s desire to also establish a diplomatic representation in Paramaribo to help strengthen bilateral ties and promote issues of mutual interest.

Yldiz Pollack-Beighle said her government would continue to support Ghana.

She lauded the long-standing historic relations between the two governments, adding that the two countries have a lot in common.

She accepted the invitation to partake in the ‘Year of Return,’ saying Suriname’s door is open to Ghana.