Ghana To Get $1bn FDI From Turkey 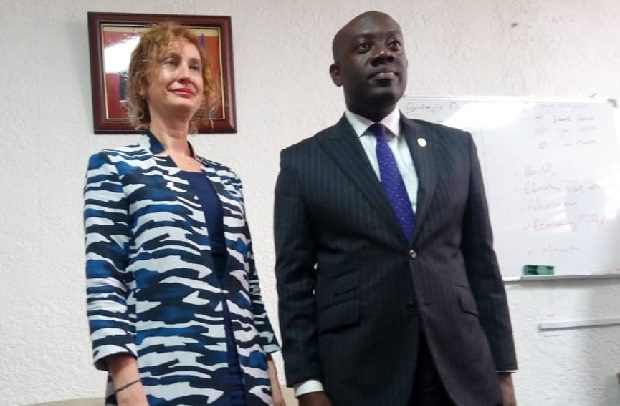 TURKEY HAS pledged to increase its Foreign Direct Investment (FDI) to Ghana from $400 million to $1 billion.

The new Turkish Ambassador to Ghana, Ozlem Ergun Ulueren made this known on Tuesday in Accra when she paid a courtesy call on Information Minister, Kojo Oppong Nkrumah.

Discussions during the brief meeting focused primarily on how to deepen the bilateral relationship between Ghana and Turkey.

Mr. Oppong Nkrumah was mainly concerned about how Ghana could have what he described as an outbound trade relationship with Turkey moving forward.

Ambassador Ergun Ulueren who has been in Ghana about two months ago, spoke about a wide range of projects that Turkish companies and institutions have been embarking on in the country since Ghana and Turkey entered their bilateral relationship in the 1960, three years after Ghana gained independence.

She indicated that Turkish construction companies have invested about half a billion in Ghana, and that there were ongoing Turkish projects in Ghana, including those in the energy sector.

The ambassador urged that the mutual relationship between both nations be maintained going forward, recounting how after the 1960s Turkey had to close down its embassy in Ghana in 1980 and have it reopened in 2009.

She spoke also about Turkey’s unflinching willingness to support President Akufo-Addo’s vision of a Ghana Beyond Aid.

Mr. Oppong Nkrumah was pleased to note Turkey’s plans to increase its FDI to $1 billion.

He told the ambassador other sectors of the economy that needed investments and that which Turkish investors or companies could consider for business.

Specifically, he mentioned the agricultural, tourism, industrial sectors and the capital market.

He told his guest during the meeting held in his office that the capital market in Ghana was booming and safe for anyone to invest in.

Most importantly, he appealed to the ambassador for both Ghana and Turkey to explore ways to open up the Turkish market for Ghanaian products.

He expressed the profound belief that outbound trade to Turkey will help Ghana’s currency, as it will earn the country some foreign exchange.