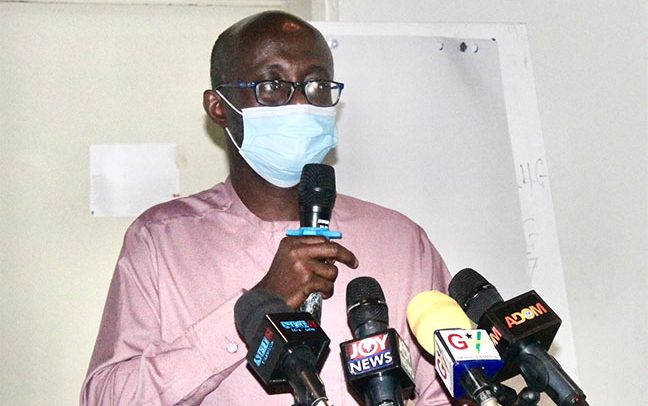 The Ghana Health Service (GHS) will from October 26 begin the roll-out of the Pfizer and Moderna vaccines, in the second phase of vaccination, across the country.

The first phase of the vaccine roll-out was aimed at the most vulnerable in the population such as the elderly, individuals with underlying health conditions and frontline health personnel.

The second phase which has the target of administering around 3 million doses, is opened to the public.

At a press briefing in Accra, Programme Manager of the Expanded Programme of Immunization (EPI), Dr. Kwame Amponsah-Achiano said the Bono, Bono East, and Eastern regions will start the second phase of the exercise on October 26.

It would then progress to the Western North and Central Region on October 27th and 28th respectively. The first week in November will see the vaccine available to people present in the Ahafo, Ashanti, Greater Accra, North East, Northern, Oti, Savannah, Upper West and Volta regions. The Upper East Region will, however, begin its vaccination in the second week of November.

He stressed that getting a large number of the population vaccinated was a major goal of the government and said the GHS is committed in making it available to the public.

Director-General of GHS, Dr. Patrick Kuma-Aboagye stated, “The GHS has started to expand the vaccination exercise to the general population in order to achieve herd immunity and subsequently reduce the burden of the disease.”

He entreated the public to take advantage of the exercise to get vaccinated saying, “Once you are vaccinated, you significantly limit the chain of spread, you protect others around you and even if you get infected with the COVID-19 virus, you are likely to develop a less severe form of the disease and may not require hospital admission- thus helping reduce the patient load on the health system.”

World Health Organization (WHO) representative to Ghana, Dr. Francis Kasolo, commended the country in its effort to continuously acquire vaccines.

He stated, “Vaccines will complement the existing public health measures to allow Ghana to go back to normal and for some of the existing restrictions to be permanently lifted.”

“The global vaccine supply challenges continue to impact negatively on the National Deployment Plan but this is gradually improving as more vaccines become available.”

He encouraged the public to continue to adhere to the WHO Covid-19 safety protocols.