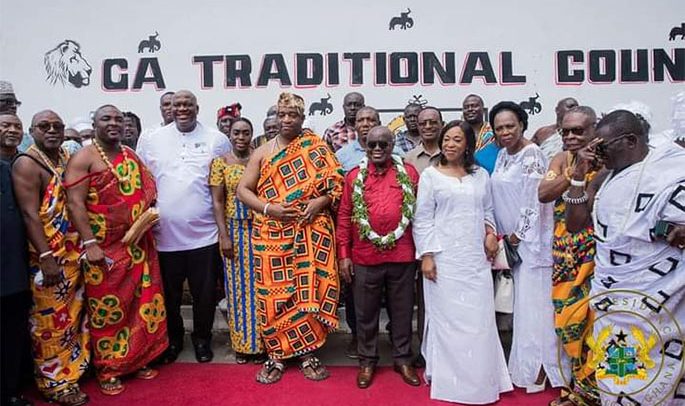 President Nana Addo Dankwa Akufo-Addo has expressed his delight over the peace that has finally been restored to the Ga State, following the installing of a new Ga Mantse, after years of protracted Chieftaincy disputes in the State.

According to President Akufo-Addo, “I’m happy today, very happy, for peace to come to the Ga State during my time as President. Everyone should be excited that now we have a Ga Mantse, after the protracted chieftaincy issues since the demise of Nii Amugi. I pray to God to give you strength to have a successful reign.”

The President made this known on Friday, 22nd October 2021, at the commencement of his 2-day tour of the Greater Accra Region, when he paid a courtesy call on the new Ga Mantse, King Tackie Teiko Tsuru II, known in private life as Dr. Kelvin Nii Tackie.

This is the second major resolution of a chieftaincy dispute in Ghana, under the leadership of President Akufo-Addo, following the successful installation of a new Overlord of Dagbon, Ya-Naa Mahama Abukari II, on 25th January 2019, which has since brought peace and development to the Dagbon State. 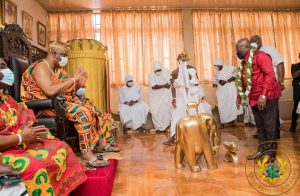 Addressing the Chief, President Akufo-Addo explained that he should have, ordinarily, begun his tour of the Greater Accra Region, which he started on Thursday, 21st October, by paying a courtesy call on the new Ga Mantse, to, as it were, seek his permission and blessings before embarking on the tour.

However, following the ceremony of gazetting of the new Ga Mantse at the Greater Accra Regional House of Chiefs on Thursday, the President indicated that he believed it will be wholly appropriate that he deferred his visit to the palace of the new Ga Mantse to Friday, to be able to congratulate him officially.

He reassured King Tackie Teiko Tsuru II that he will give everything within his power to help the new Ga Mantse unify the Ga State, stressing that a united Ga State will help provide a conducive environment for the central government to function and help improve the living standards of the people

“The pledge you’ve made to maintain peace in Accra is most welcome, and we must all play our part to address the remaining chieftaincy issues in the country. We’re looking forward, as a government, to work with the traditional authorities to help transform the nation,” the President stated.

President Akufo-Addo also took the opportunity to thank Ga Mantse and Ga people for their support during the last election, even though his party, the New Patriotic Party, lost seven (7) seats it once held in the Greater Accra Region.
“He was, however, confident that “we will get back all the seats we lost in the 2024 elections. because we are working towards it,” he added.

On his commitment to ensuring that Accra becomes the cleanest city in Africa, the President said, that commitment is still valid, and that “addressing the sanitation issues in Accra is of utmost importance before I leave office in January 2025”.

Korle Bu Gets New Board