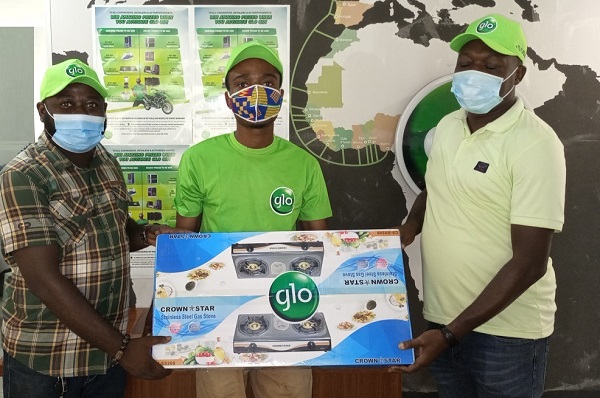 Some of the winners

Glo Mobile, at the weekend, presented prizes to winners in its SIM Activation promo in both Kumasi and Koforidua.

The two separate events, which were held at the Gloworld shops in both cities, had scores of winners receiving their winning items for the various categories of performances in the first month of the promo.

The promo, which started in March, was scheduled to run for three months, but for the disruption occasioned by the lockdown due to the efforts by government to control the spread of Covid-19 in the country.

The first batch of presentation to winners was done in Accra last week, with hundreds of winners taking home items such as gas stoves, blenders, pressing irons and mobile phones.

These items being presented are in the ‘assured’ category, which means that the winners automatically won the items immediately they met the qualification threshold for any of the prizes.

There is however a grand prize category, which has bigger items available to be won by agents, canvassers and freelancers working for the company. These items include microwave ovens, smart phones, home theatre systems, 40-inch smart TVs and motor bikes. To have any of the grand prizes, winners have to rank among the best performers in the consistency of quality activation of Glo SIMs for three consecutive months.

Glo Mobile Head of Business, Mr. Hardeep Kheterpal, said the company had been more than ready to reward and motivate hard working agents and canvassers who developed a culture of excellence. He added that apart from the prizes for high performers, earnings were also going up for such performance. He encouraged them to achieve more to earn more.

Some of the winners promised to do all they could to win more of the prizes and to also expand their earning capabilities.