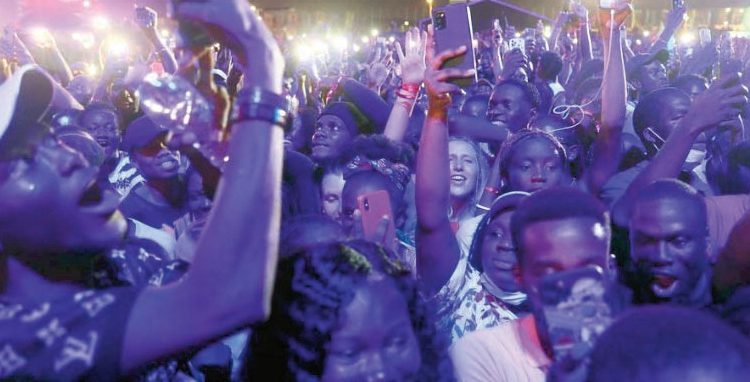 A scene from the event

Music lovers and patrons of this year’s Global Citizen Festival held at the Black Star Square in Accra on Saturday were left in absolute awe as they were thrilled with performances from artistes drawn across the world.

The event, which was to mark the 10th anniversary of the Global Citizen Festival celebration, was full of glamour, featuring the American singer, Usher Raymond.

He shared the stage with other chart-topping artistes such as Stormzy, Sarkodie, Stonebwoy, American songstress SZA, Gyakie, Tems, Tiwa Savage, Pheelz, Oxlade, Yaw Tog and Kwesi Arthur, who put up pulsating performances to entertain the crowd at the event.

Usher, who was the headline artiste for the festival, was the last to perform for about an hour. Among the hit songs he performed were “Party” featuring Chris Brown & Gucci Mane and “Yeah” featuring Lil Jon & Ludacris.

The icing on the cake was when Usher introduced Nigerian artistes Oxlade, Pheelz and Tiwa Savage one after the other as surprising acts of the evening,

“ACCRA!! …thank you for rocking with me at @GlblCtzn #globalcitizenfestival tonight! @TiwaSavage @oxladeofficial @Pheelz @dwpacademyworld my stage is your stage,” Usher tweeted after his performance.

But the night was not all about Usher, as Stormzy and the other artistes also gave a great account of themselves with their performances. The height of the UK rap giant’s performance was bringing his young brothers Yaw Tog and Kwesi Arthur to join him to perform the remix version of their song titled ‘Sore’.

Sarkodie got the fans screaming all the time he was on stage. Stonebwoy, Tems and Gyakie also did amazingly well.  SZA was not only beautiful but phenomenal on stage.

“I was scared ya’ll wouldn’t know my music,” she said when she paused her performances to speak. However, it turned out that some of the audience knew her music. It was after her performance that Usher was introduced.

The Global Citizen Festival is a celebration of music and social change that brings together artistes, activists, world leaders, and Global Citizens to demand urgent change on the world’s biggest issues.

The Global Citizen Festival stage provides a platform for world leaders, business leaders, and philanthropists to make commitments in the mission to end extreme poverty and drive real, lasting change.

Several dignitaries including President Akufo-Addo attended the festival on Saturday.

He congratulated the organisers for choosing Ghana to stage the festival.

“I thank the Global Citizen team for holding this fantastic and impactful festival in partnership with the Government of Ghana here at the Black Star Square, a place symbolising national unity, freedom from oppression and justice for all.

“A big Ayeekoo also goes to all artistes, partners and sponsors of the festival,” he added.

President Akufo-Addo called on the youth to support the government in order to achieve the 17 Sustainable Development Goals (SDGs).

“We have a limited window of opportunity to act decisively to lift millions of people out of poverty, promote inclusiveness and equality and safeguard the health of our planet,” he said.

The President announced the launch of a $1 billion fund known as “the African Prosperity Fund” to undertake development on the continent.

The project areas include infrastructural development, financial access and participation of women and youth, education, healthcare, technology and sustainability so that we leave no one behind in Africa.