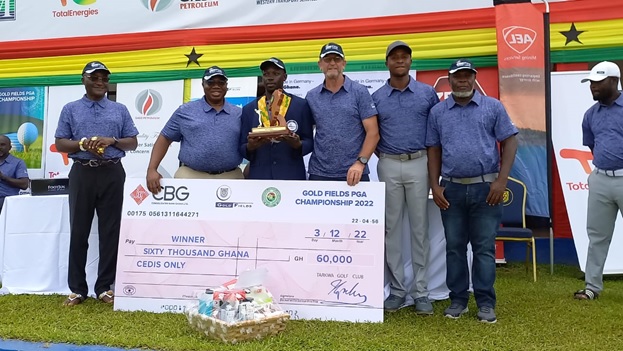 Executive Vice President for Golf Fields and Head of West Africa, Joshua Motorti, has assured Professional Golfers’ Association of Ghana (PGA) of his outfits continued support to the sport of golf and sports in general.

Speaking at the closing ceremony of the ninth edition of Gold Fields PGA Championship held at Wasa Damang in the Western Region, he said Gold Fields will continue to back golf and other sport in Ghana because it is one of the company’s core values.

“The reason why we support golf is that we believe that safety is the same as health, and health is the same as sport, that’s why Gold Fields support sports.

“We will continue to support sports. So this will not be the last one because we believe that a healthy person, makes a safe person, and makes a productive person of human resource,” he disclosed.

He showed a masterclass performance to get better off the course in a solid four-day performance.

With gross total of 286, same as second placed Vincent Torgah, the former champion got the better off the latter after breaking the second tie with a shot.

“The Tournament Director, Akwesi Prempeh, pushed me to work hard, so big thank you to him,” Barni said.

In the senior category, Robert Degbe won with SSS 223,

Emos Korblah won in 2015, while Lucky Ayisah won in 2020. Christopher Francis from Nigeria won in 2019, the only foreigner to have won the tournament.