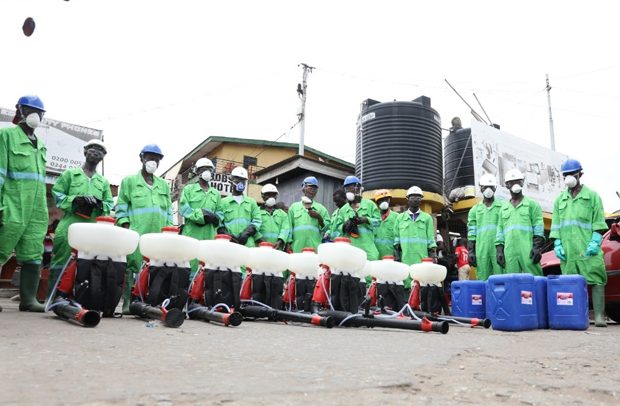 The fumigation gang in action yesterday

The government, through the Ghana Tourism Authority (GTA), has announced the immediate closure of all beaches to prevent the spread of the coronavirus disease (COVID-19) in the country.

A statement issued by the GTA explained that the action had become necessary following the government’s directive to suspend all public gatherings. “GTA hereby orders all beaches to be closed to the public until further notice,” it said.

Over the weekend, there were scores of revelers that thronged some of the beaches, especially in Accra and Cape Coast, when it became apparent there was not going to be any church services on Sunday.

As a result, the GTA has moved to clarify that thronging the beaches impedes the fight against COVID-19 and it goes against the President’s directive.

The statement further noted that the GTA, with the support of National Security and the Police Service, would begin patrol of the beaches from March 24, in order to ensure compliance with the closure order.

Twenty-four (24) people have been infected in Ghana with the disease which has been declared a pandemic by the World Health Organization (WHO).

The COVID-19 Response Management update of the Ghana Health Service (GHS) showed that as of Sunday, a total of 315 suspected cases had been tested by the Noguchi Memorial Institute for Medical Research (NMIMR) and the Kumasi Centre for Collaborative Research (KCCR). It said the infected rate stood at 24, with one death.

Among the confirmed cases, seventeen (17) are of Ghanaian nationality and seven (7) other foreigners from Norway, Lebanon, China, France and the United Kingdom (UK).

On contact tracing, a total of 575 contacts have been identified, according to the health authorities, and are being tracked. One of the contacts developed symptoms and has been confirmed positive.

All the other twenty-three (23) confirmed cases are being managed in isolation and are doing well on treatment.

Markets in the Greater Accra Region were yesterday closed and disinfected as part of the government’s measures to stop the further spread of COVID-19 in the country.

It is being done in collaboration with the National Mosquitoe Control Programme (NMCP).

About 1,300 sprayers divided into teams of 10 were each assigned to one of the 137 markets in the Greater Accra Region alone that partook in the exercise.

The team used Chlorine Dioxide and Sodium Hypochloride for the disinfection exercise.

The Minister for Local Government and Rural Development, Hajia Alima Mahama, prior to the exercise, said the decision to disinfect the markets was arrived at in consultation with the market women and expected high level of compliance.

Before the exercise commenced, the Chief of Defence Staff of the Ghana Armed Forces, Lt. Gen. Obed Akwa, together with the Mayor of Accra, Mohammed Adjei Sowah, inspected some of the markets. They expressed their satisfaction at the high level of compliance by the traders.

Some military officers were also deployed to provide security at the Kaneshie Market.

The Police Administration was also heavily involved in the exercise, assisting the fumigation teams to do a good job.

The main entrances to the markets were locked in compliance with the Local Government Ministry’s directive to allow for the scheduled disinfection exercise.

Scores of traders from other parts of the country who showed up at the Adabraka Market, for instance, to trade were left with no choice but to return as authorities would not budge to their explanation that they were misinformed about the date for the exercise.

Officials of the Ayawaso Central Municipality were seen at the Mallam Atta Market sacking squatters and some traders who had come to unload their goods in the market although the exercise was yet to begin.

The Achimota Market which usually sees trading activities as early as 5:00 am was empty at the time DAILY GUIDE visited the place.

Officials from the Tesano Police Command, led by the Divisional Commander, Supt. George Atia, inspected the market to ensure no trader was present ahead of the disinfection exercise.

Shops at the Makola Market were closed at around 5.30 am, with very few human movements as traders heeded the directive to close their shops to allow the exercise to be conducted.

The Okaishie Market appeared deserted as early as 6 am, with no trader seen around. Also all four entrances to the Tema Community 1 Market were closed as authorities prepared to disinfect the market around 6.30 am.

Traders at the Amasaman Market within the Ga West Municipality had properly covered their wares, awaiting the fumigation exercise.

At Tiptoe Lane near the Kwame Nkrumah Interchange, shop owners and traders had closed their business and were patiently waiting for authorities to begin the exercise.

At about 7:30 am, sprayers arrived at the Kaneshie Market Complex to commence the disinfection exercise.

Although the directive was for markets to close, mini shops lined up along the streets of major markets also closed their businesses for the exercise.

Most lorry stations located near market places also moved to different locations to enable the team carry out the disinfection exercise.

Commercial drivers at Madina, for instance, had to resort to loading their vehicles along the sides of the road due to the closure of transport terminals within the Madina Market for the exercise.

The exercise, according to the drivers, has affected their business, as most of their regular passengers have found other means of transportation to their various locations.

They, however, agreed the exercise must be carried out for the safety of the public.

At the Ashaiman Mandela Market, traders had neatly covered their wares and absented themselves from the market to allow the exercise to be conducted.

The Ashaiman Municipal Assembly, however, arrested some eight recalcitrant traders for going against the directive to stay away from the market for the fumigation exercise to take place.

According to reports, two traders who had arrived from Burkina Faso to sell tomatoes were part of the eight.

They were arrested by a jointed taskforce from the Ashaiman Municipal Assembly and the Ashaiman Divisional Police.

The Deputy Minister for Local Government and Rural Development, O.B. Amoah, said the disinfection exercise would not kill and prevent the deadly coronavirus.

He, however, noted that the move is a routine by local authorities to sanitize and clean up market facilities.

“What we’re doing is not to prevent coronavirus. Anybody that tells you that the disinfection we’re undertaking today has the efficacy of killing coronavirus is a lie. If along the line, government secures coronavirus disinfectants, we’ll make it known to the public,” he said on Citi FM in Accra.

He also mentioned that the chemicals being used are not harmful to humans.

The affected markets will be opened to the public today, according to a statement from the Local Government Ministry.