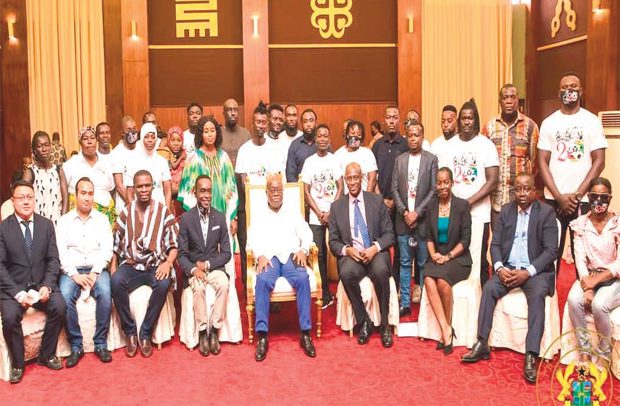 The President, Sports Minister and other officials pose after the meeting

President Akufo-Addo has committed himself to support the activities and operations of the May 9 Foundation.

The foundation was set up by former Asante Kotoko Manager, Herbert Mensah, after the infamous Accra Sports Stadium Disaster on May 9, 2001 during a football match between Hearts of Oak and their archrivals, Asante Kotoko.

One hundred and twenty seven football lovers lost their lives through a stampede at the Accra Sports Stadium, then Ohene Djan Stadium, when police opened teargas on soccer fans who were protesting against what they considered to be poor officiating during the game.

Herbert Mensah, who personally carried some of the victims to safety on that day, thus set up the foundation to help the survivors and families and dependants of those who died during the stampede.

President Akufo-Addo thus decided to offer government’s support to the foundation when leadership of the foundation called on him at the Jubilee House yesterday.

“People can never come back but we can remember them. I am intrigued by the idea that the May 9 Foundation is beyond football, that you have embraced the wider social space involving dislocations, and floods. This is a huge undertaking and you need a lot of courage and capacity to be able to carry out that work. You will have the modest support that this administration will be able to give you, I can promise you that,” the President said.

He has since tasked the Minister for Sports to engage the foundation to see what kind of support they can offer.

The meeting was the first of its kind between a sitting President, the foundation and surviving families of the disaster victims.

An obviously elated Herbert Mensah could not help thanking the President for the opportunity and his words of encouragement, including his decision to support the foundation.

The foundation, he said, has decided to expand its scope of work to offer assistance to Ghanaians who may be affected by other natural disasters other than the May 9 tragedy.