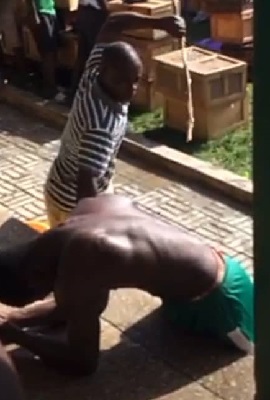 The Ghana Education Service has constituted a committee to investigate the flogging of a student at St. Stephens Senior High Technical School (STEPSS) at Akyem Asiakwa in the Abuakwa South Municipality of the Eastern Region.

The committee was set up on the instructions of both the Regional and Municipal Education Directorates after a leaked video of the Mathematical teacher, Raphel Amable, emerged, administering corporal punishment to a recalcitrant student.

Flogging has been banned in schools by the Ghana Education Service.

The video captured the Maths Teacher lashing a half-naked Form One student in the open.

The student wearing only short is seen in the push-up position being whipped at the buttocks by the teacher, also a Senior Housemaster, in the full glare of other students.

The 25 seconds video captured the teacher administering 15 strokes but according to sources, the lashes were about 25.

The student is alleged to have assaulted another student during a misunderstanding resulting in the hospitalization of that student.

The type of punishment adopted by the Senior Housemaster has however, rekindled the debate on corporal punishment.

Headmaster of the School, Samuel Asante Anarfi, when contacted, confirmed the incident and said that the disciplinary committee of the school-sanctioned punishment for the student seen in a viral video being flogged.

He said a committee left the punishment to the discretion of the Senior Housemaster, adding that the student was found guilty for assaulting and stamping on the chest of a junior student in boarding house resulting in his hospitalization.

Despite the headmaster’s explanation, the GES regional directorate is adamant and want the Housemaster probed.