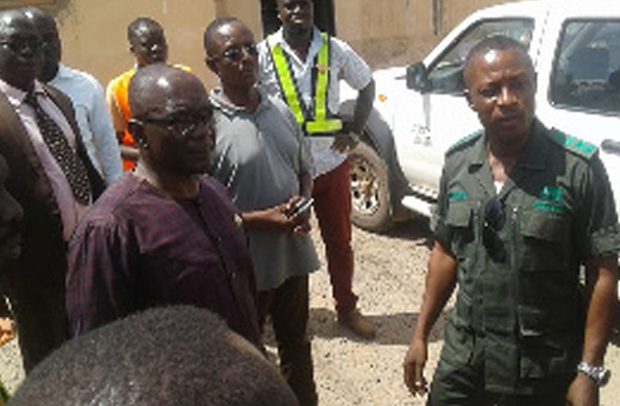 Officials of the Economic and Organised Crime Office (EOCO) and members of the Special Operation Team of the Ghana Revenue Authority (GRA) yesterday clashed over five containers of rosewood being allegedly smuggled out of the country.

The confrontation, which nearly turned into fisticuffs, was over which of the two institutions has the authority to investigate the case.

When DAILY GUIDE arrived at the scene, the officials of the two state agencies were engaged in a heated exchange of words, with each side vigorously stating their points.

The trucks were travelling from Nkwanta in Volta Region to Tema Port for export when they were intercepted on the Tema-Akosombo highway at the axle weigh bridge at Afienya in the Ningo-Prampram District of the Greater Accra Region.

It would be recalled that the Ministry of Lands and Natural Resources directed the Forestry Commission to ban the harvesting of the endangered rosewood.

As a result of the ban, members of the GRA Taskforce seized the consignment but some top officials of EOCO in the Tema Regional office stormed the place to take charge of the impounded consignment when the GRA personnel were about to escort the three trucks to their Collection Point at Airport, Accra.

EOCO wanted the consignment to be conveyed to the Tema Regional Police Command for further investigation but the GRA Taskforce officials, made up of armed military personnel, refused to release the Rosewood.

An officer from the Forestry Commission was called to resolve the impasse but he also asked that the consignment should be sent to their depot at Achimota in Accra for investigation but that was also rejected.

Interestingly, while officials of the various institutions were arguing, the supposed owner of the consignment managed to escape, leaving the drivers to their fate at the scene.

Upon several phone calls and negotiation, they finally agreed to allow the GRA Taskforce to transport the consignment to the collection point.

However, management of the axle weighbridge demanded payment for the overloaded consignment before they could move the consignment.

But members of the GRA Taskforce disobeyed and ordered the drivers to the trucks to move.

Ex Warrant Officer (WO), Musah Atibila, Security Manager of the Axel Weighbridge, told DAILY GUIDE that “the issue was very complicated so my boss called me and asked that we should allow them to go so we could go in for it later.”

“We impounded the trucks upon weighing the trucks and asked for the content which was disclosed as rosewood.

“Some members of the special team appeared at the scene and demanded the consignment,” he explained.

He, however, stated that his outfit would take steps to retrieve the rosewood and prosecute the culprits.