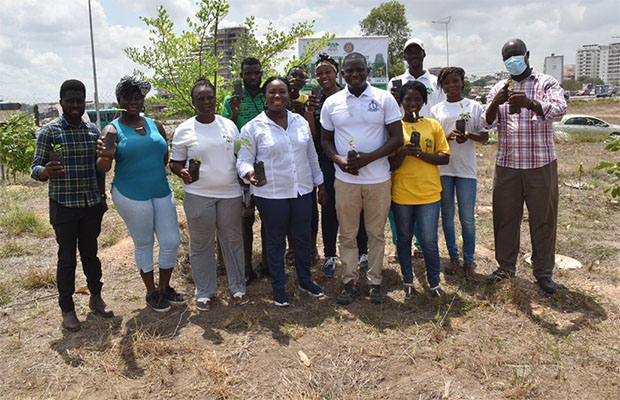 A group that is aforestation biased has appealed to government to consider using the Waterboxx technology to guarantee success of the Green Ghana Project.

According to the group, the Waterboxx technology will guarantee over 90 percent survival rate of tree seedlings planted irrespective of climate condition and area they are planted. As compared to the conventional tree planting process.

The Waterboxx Technology origionally known as the Groasis Waterboxx was developed by Dutch former flower exporter, Pieter Hoff. It was designed to help grow trees in dry areas or areas that had poor soil quality.

Introduced in Germany, the waterboxx is designed to conserve and supply 50ml water per day to tree seedlings through a fiber tread fix beneath it for 12 months.

This keeps the soil around the tree moist all year round. The boxx also has an additional feature to conserve dew and rainwater. It also has an outlet that releases excess water to prevent the plant from being destroyed by over watering.

The technology has been extensively used and extremely successful in drought and desert prone jurisdictions like Dubai and Morocco, where nearly 90 percent of plants survived with the box compared to percent survival without it.

Mr. Addo noted that the waterboxx is so efficient that, the planted tree seedlings will need little assistance to grow. He said Planting 5 million trees is a huge task that does not end at the planting stage, but requires constant nurturing for the tree to survive. The Waterboxx provides that nurturing and watering to keep the soil moisturised at all times for a whole year.

The technology also protects the soil and seedlings from direct sunlight and enables the seedling to get its root structure. When you consider what goes into making a tree survive, Waterboxx is a more affordable option than the conventional system.

He therefore appealed to the government to consider partnering with their association to plant 100,000 trees in the dry areas to restore the forest cover and make the Green Ghana Project a success not only in the forest areas, but also in the dry areas where rainfall is inadequate.

He revealed that the African Aforestation Association has already planted trees in some difficult areas in Volta, Greater Accra, and Northern Regions where the trees are doing well with little supervision.

In support of the national Green Ghana Project, the association planted Cocoa, Cashew, Mahogany, and Acacia seedlings using the Waterboxx technology at a section of the Tetteh Quarshie Interchange in Accra.

The Chairman of Association, Togbe Dra-Aboetaka IV, says they chose the interchange to give city dwellers and tourists opportunity to see some of these trees without travelling to the country side.

He stressed that the Association’s commitment to aforestation is absolute because it has health benefits, reduce climate change, lead to job creation, poverty reduction and increased food production.

A former Fisheries Minister, Elizabeth Naa Afoley Quaye, who is a Patron and Trustee of the Association encouraged citizens to support the government’s afforestation initiative as “it is for our own survival.”

“We can see clearly that the rains are not coming because we have lost our forests, the ecosystem has been tampered with. So we are pleading with everybody to join hands with us to green Ghana”, she implored.