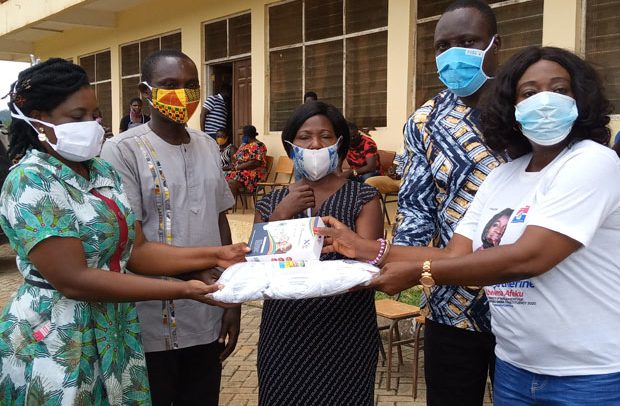 The Headmistress of Gwiraman Senior High School in the Nzema East Municipality of the Western Region, Agatha Mensah, caused a stir at the school last Thursday when she told the students she was above the standard of stealing Veronica buckets.

It was rumoured in the community that two Veronica buckets out of items donated to the school by the Member of Parliament (MP) for the area, Catherine Abelema Afeku, had gone missing, with some people pointing fingers at her.

Ms. Afeku last Thursday, while making a similar donation, remarked, “We have heard that two Veronica buckets which were donated to the school earlier are missing. We will ask the headmistress where those buckets are, because if this school doesn’t want the items we can send them to other schools that want them.”

The MP explained that the items were being distributed to the various schools in the municipality to help prevent the spread of the virus and used the occasion to educate the students on the need to observe the preventive measures.

However, the insinuation did not go down well with the headmistress, who retorted that she was above petty stealing of Veronica buckets.

“I have heard that some people are saying the MP brought two Veronica buckets and the headmistress is hiding them. I want to make it clear to the students and staff that the buckets are there and Madam MP can go and inspect them,” angry-looking Agatha Mensah fumed.

“These ones that are being donated will be given to the students to use as expected,” she added.

The Municipal Director of Education, Justina Djaba, who rebuked the headmistress for her utterances, asked the students to study hard to pass well their examination so they could enjoy government’s scholarship at the tertiary level.

The Nzema East Municipal Chief Executive, Frank Okpeyen, said the fight against the global pandemic required the collective efforts of every Ghanaian, including the students and teachers.