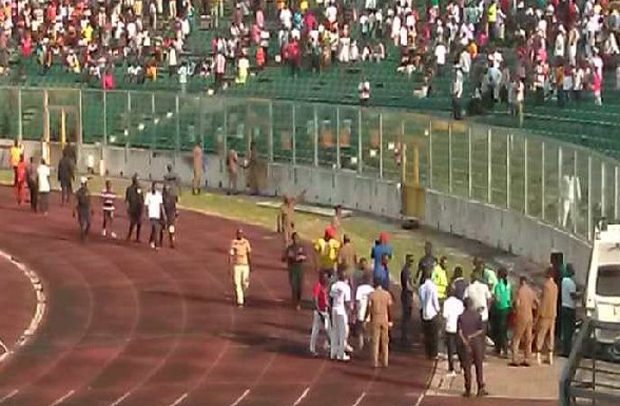 Some Hearts of Oak supporters have been nabbed by the Police for crowd violence in their 2-0 defeat by Asante Kotoko in the return leg of their Super Clash friendly.

The fans showed their displeasure to a decision by the referee not to award them a penalty kick by breaking the chairs in the Green stand of the Baba Yara Stadium.

They also threw missiles onto the field of play to prompt action from the police.

The trouble started from the 73rd minute when Kotoko took the lead courtesy Obed Owusu – a result from a counter attacking move after Patrick Razak had gone tumbling in the penalty box.

Hearts of Oak fans felt they should have had been awarded a penalty after but this call was waved off.

This infuriated the Phobian fans who immediately after the goal started destroying the seats and threw them onto the field of play.

Hearts eventually lost the game 2-0 to finish the two-legged friendly with a 4-0 aggregate defeat.