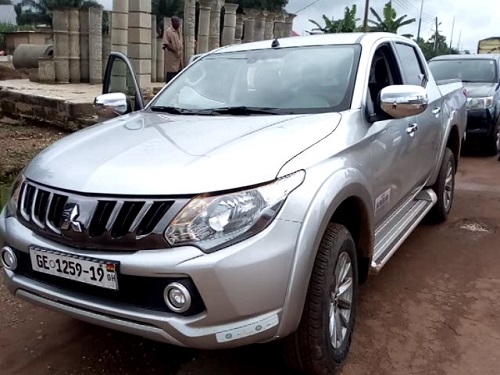 The Hohoe Municipal Education Directorate, which has been without a vehicle for monitoring and supervision for the past four years, has now been handed a Mitsubishi pickup truck.

The truck was presented by the Energy Minister, John Peter Amewu, on behalf of President Akufo-Addo in response to many appeals by the directorate regarding their transportation challenges.

Until four years ago, the directorate had been depending on an old rickety number christened “Methuselah” which broke down completely.

They then resorted to the use of taxi cabs and motorbikes until the vehicle was donated.

The absence of a vehicle had affected the supervision and learning of pupils at the Basic Education Certificate Examination (BECE) level.

Municipal Director of Education, Emefa Amenya, commended the government highly for the vehicle and was optimistic that monitoring and supervision would improve, as well as performance of teachers and students.

Presenting the vehicle, the Energy Minister said the New Patriotic Party (NPP) government is commitment towards education in the area.

According to him, from 2015 to date, statistics from the Hohoe Education Directorate had not been the best.

To this end, the pickup together with the trial mock examinations and 11 motorbikes to all circuit supervisors in the municipality is geared towards improved education outcome in the area.

The Energy Minister, who sponsored the mock and motorbikes, promised to reward the best five pupils who would pass the BECE.

The overall best gets a trip to South Africa, while the remaining four get cash and other prizes.

Mr. Amewu who was a Municipal Chief Executive for Hohoe under former President Kufuor’s tenure, earlier provided the 2019 BECE candidates in the area with 1900 mathematical sets of instruments.

He urged all sons and daughters of the area to come on board to support the education of the young people in the municipality.