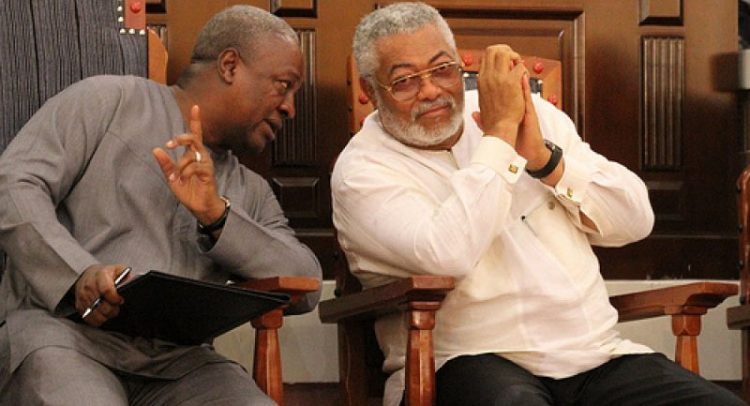 It is an undeniable fact that it was Mr. Jerry Rawlings who made Mr. John Dramani Mahama what he is today. He made him the Deputy Minister of Communication and later the substantive Minister of Communication in his government.  Mr. Rawlings also lobbied among the senior members of his party to choose John Mahama as the running mate to the late Professor Atta Mills and when the party won power in 2008, Mr. Mahama became the Vice President of Ghana.

Immediately he became the Vice President of Ghana, he started his mechanization.  He capitalized on the weakness of Prof. Mills to build his own presidential ambition which led him to be the President of Ghana when Prof. Atta Mills died mysteriously at the Castle, the seat of government. The death of Prof Mills was a blessing to Mr. Mahama who already has the dream of becoming President of Ghana in future.  As to what killed the meek and mild professor, the answer is as elusive as trying to find a needle which is dropped in the Atlantic Ocean. When a sitting president gets sick and find himself at the maternity ward of the 37 Military Hospital, you have to turn your pillow tonight and rethink.  There are so many questions than answers.  When he eventually won the controversial election in 2012, Mahama started to show Rawlings where power lied.

He clandestinely pushed his attack dogs to take Rawlings to the cleaners.  The attack went so far to the extent that the General Secretary of the party, skinny Asiedu Nketia referred to Rawlings who founded the NDC as a “chained dog who can only bark but cannot bite.”  When pushing came to shove, Rawlings had to fight back, referring to his attackers as ‘babies with sharp teeth and greedy bastards’. Out of anger Rawlings posted this rhetorical question: “Who born dog?” That was when the battle line was drawn.  Mr. Rawlings intensified his criticisms of the John Mahama administration as corrupt. He warned that the NDC will lose the 2012 general election if they did not put a stop to the naked corruption that they continued to engage in.  Indeed but for Justice Atuguba who added his vote to the split decision of the Supreme Court who sat on the election petition filed by the NPP, Mr. Mahama would have lost the election.  He then became the first President of Ghana to win an election through a petition at the Supreme Court.  That to me is not an enviable achievement at all.

Mr. Mahama is a cunning politician and anyone who would take him for granted does so at his own peril.  Behind the nice smile of Mr. Mahama is the lust for political power at all cost. To him, he is destined to be President of Ghana for eight years come what may.  He saw no reason why Mr. Rawlings and Mr. Kufour had their two terms in office but he was voted out of power in his attempt to have a second term. So immediately he lost the 2016 presidential election, he put his plan “B” on the table.  Under the guise of a ‘thank you tour’, he portrayed himself as the only credible candidate to wrestle power from the NPP because he is already known by Ghanaians.  He secretly formed a shadow National Executive Committee Members of the party while waiting for the National Delegates Congress of the party.  His mission was to see to it that Voltarians who will contest National Executive positions were pushed aside to render Rawlings powerless in the party that he, Rawlings and his wife put their noses on the grindstone to nurture to become what it is today.  Mr. Mahama made sure all these maneuverings were done at the blind side of Mr. Rawlings, after all was it not Rawlings that he wanted to shove aside? His plans worked to perfection as all his shadow National Executive Members of the party picked forms to contest one position or the other.

When the day of reckoning came, yours sincerely disguise myself and visited the Congress grounds. Wherever you went you could hear delegates discussing the “JM Team” and why they should win to teach Rawlings a bitter lesson because Rawlings has been referring to Mahama as corrupt. Money did flow that day and so as delegates moved from one drinking spot to the other they loosely talked about the plans and how much each contestant from the JM camp gave them. They were brainwashed to believe that it was the Voltarians who cost Mahama the disgraceful lost of power and as such if they are pushed out of the National Executive Membership they would have no power to interfere in the affairs of the party.

Then Madam Anita De Soso zoomed to the congress grounds with her retinue of cheering supporters who were mainly ladies.  She mistakenly had the funny feeling that it was a done deal. Koku Anyidoho also followed with his supporters who were mainly from the Volta Region.  He was wearing a confident smile because he thought he had served the late Mills so well, delegates would move in sympathy for him.  He also thought his acidic tongue will go a long way to win.  They made so much noise, threatening mayhem if Koku lost the election.  Somebody might have hinted them that JM had a team and he had sponsored them with cash and goodies to win the hearts of delegates.  Madam Anita and Koku Anyidoho lost and when a journalist asked Madam De Soso whether Mr. Dan Abodakpi would win now that she and Koku had lost, she had this to say: “They are going to push all the Voltarians out.  You wait and see the results.” Someone else might have revealed to her the plan “B” of JM. At the end of the counting of votes for the National Chairmanship position, Mr. Dan Abodakpi, a veteran politician who played key roles in the party when Rawlings was in power lost miserably to Elder Samuel Ofosu Ampofo.  Anita’s prediction came to pass and the dream of JM came to reality.  I don’t blame Mahama for bulldozing his way through because the Voltarians took things for granted.  When Rawlings was being treated like dirt by the Mahama boys they kept silent so now that he has showed them the red card, serves them right.  Where I come from, when a young man is seen insulting an elderly person a bystander will reprimand the young man and warn him to desist from insulting elders because if you are a young man and you wake up at dawn the dew of dawn will soak you.  Will you be surprised if a new political party emerges from the Volta Region?  Your guess is as good as mine.

For now Mr. Mahama is very comfortable but the day of reckoning is beckoning.  Election 2020 is around the corner. If the Voltarians, whose kinsmen and women were treated so shabbily by JM, sheepishly follow the man, it is their problem. Mr. Mahama will try to appease them by choosing a running mate from the Volta Region but the question is:  can such a running mate quench the fire that is burning in the hearts of Rawlings and other Voltarians who were treated with contempt?  It was my late father who told me that if anyone does me any wrong I should pay the person back while we are all alive here on earth so that when we die God the all knowing will judge the case.  A word to the wise is in the North where John Dramani Mahama comes from?

Tags: How To Snatch A Political Party From The Grip Of Its Founder
Share this article:
Previous Post